Benjaminito: A Work in Progress 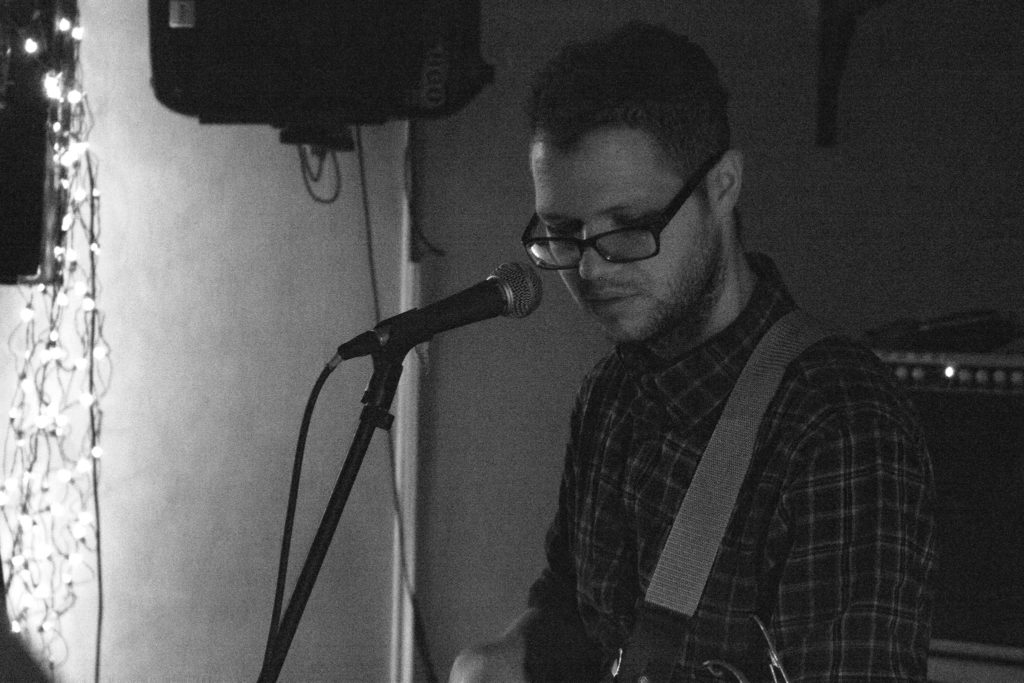 Benjamin Torrey, 26, sits in a rain-soaked chair under an umbrella in the backyard of The Westy. He’s wearing a black Pinkwash shirt and grey cut-offs. He’d wanted to go to a bar since he works from home and so “I’m not stuttering and talking about self-harm in front of college students eating bagels or whatever.” His steel blue eyes survey the area from behind his squared brown glasses. He asks if it’s ok if he smokes before pulling out a lighter wrapped in duct tape and a box of Natural American Spirits.

The night before, Torrey had been in Trumansburg shooting a music video for a friend who goes by the stage name Izzy True. Torrey had wanted to make music videos since transferring from Tompkins Community College to Ithaca College’s cinema and photography program. It’s been two years since he graduated and he’s been busy doing far more than just making videos for friends. Torrey is a videographer at the Ithaca Voice and a veteran volunteer at Ithaca Underground, a local non-for-profit organization and music community – shooting and editing video, creating art for posters and merchandise, and helping train new volunteers. He also performs under the name Benjaminto and puts together house shows with his roommate Krystal Cannon at their house, dubbed theTweehouse.

While many who know him now would agree, Torrey had a long journey to get here. Having battled depression and anxiety for most of his life, Torrey hadn’t planned to finish high school, let alone live past 18. He grew up in Lansing, a primarily white town not too far from Ithaca, with his two sisters, Jamaican mother, and Caucasian Michigan-born father. With even his cousins on his mom’s side seeing him and his sisters as “their white cousins,” Torrey had a hard time with his biracial identity growing up.

He’s also had a stutter since kindergarten and always been shy. Once middle school hit, things changed, he says – he became loud, obnoxious, and a “shitty bully.” Always feeling sad and scared, he avoided social activities. Stomachaches began to greet him the second he got to school. Being a good kid with good grades didn’t make up for his lack of interest and the monotonous work.

Sophomore year of high school, Torrey got a bad case of pneumonia, keeping him out of school for weeks. He was glad to be home, but eventually his parents urged him to go back, which frightened him. It’s common to interpret actions and memories negatively when suffering from anxiety and depression. When Torrey thought of his friends, whom he hadn’t talked to, he says he only remembered how mean he’d been and began hating himself. He tried returning a few times, but ultimately decided he couldn’t.

While his parents allowed him to drop out, his emotional state worsened. Without having any major obligations, he’d lie around all day listening to music, watching movies, or playing videogames. His parents tried to get him help, he says, but “I didn’t know what was going on with me and I didn’t trust the people I was talking to.”

Everything changed when his sister asked for a guitar for Christmas one year. Torrey taught himself to play the instrument during the day while home alone.

“Working on things felt like a really healthy outlet,” he says.

Having fallen in love with indie band Neutral Milk Hotel, Torrey taught himself how to play every song off In the Aeroplane Over the Sea. For his older sister, commuting to college meant waking up each morning to Torrey screaming the songs’ lyrics.

His video game habit also turned out to be far more helpful than he initially thought.

“Sammus [Enongo Lumumba-Kasongo, social justice and nerdcore rapper], Naps [Jason Calhoun, Torrey’s childhood best friend], and I all learned how to do multitrack recordings through MTV Music Generator,” he explains. Through using loops and layering tracks, the game taught him how to create songs. He also learned to play drums through Rock Band. “It’s not impressive to tell real musicians that,” Torrey says. “But it’s cool to be able to do that.”

In 2010, when he was 20, some friends he’d met on a message board about Elephant 6 – a music collective Torrey discovered through a music sampler on his family’s computer – invited to play Athen’s Pop Fest in Georgia. Performing in the “really supportive, safe environment” of someone’s backyard among friends, he felt comfortable and thought about hosting his own shows.

Most of the songs he’d written, and still writes, are about his battles with his mental health.

“Benjaminto is the sad essence that revolves around Benjamin Torrey, the mix between cute vocal melodies and witty slightly depressing lyrics,” says Colgan.

To Torrey, the things in life that scare him seem less scary when sung to pop music.

“I’ve always felt like after writing a song about like suicidal thoughts I’ve been having or [pushing friends away due to anxiety] – once I’m finished with it, I feel so much better,” Torrey says.

In 2010, Torrey also decided he was ready to go back to school. He started at Tompkins County Community College, where he found the professors to be encouraging and great resources. He also had the support of his first long-term girlfriend, which he’s still thankful for. After transferring to Ithaca College, Torrey quickly became friends with Tyler Coby, class of ’16, and Matt Colgan, class of ’17, who got Torrey involved in Ithaca Underground (IU). Before that, Torrey describes his anxiety as debilitating to the point where he couldn’t order food from a mall food court.

“I feel so much more invincible just knowing there’s so many cool people there [at IU],” he says. “If you’re not a dick, people will just love you; everyone is there to just be nice to you.”

But as much as Torrey talks about how IU helped him, he’s also helped them in a big way.

“While Benjamin continues to become busier in his own endeavors, he has made a lasting impact on our organization from our protocols, to our aesthetics,” says Bubba Crumrine, president of the IU Board. “And any time he is present in our meetings and events, there is always an extra level of passion, excitement, and inclusiveness added to the environment. He is one of the most loving and engaged people I know. His passion for music and the desire to help others learn, succeed, and be a part of something bigger than themselves is the embodiment of the Ithaca Underground mission.”

In 2015, a year after graduating, Torrey moved into an apartment with Krystal Cannon and immediately decided to start organizing shows. They started as if joking, only inviting a few friends; overtime the crowds became bigger and the bands more popular, turning their apartment into a more serious venue. They brought in bands Torrey had met through IU who typically play much larger venues, or as Torrey says, “bands that shouldn’t be in a tight space.”

As co-owner of a venue he lives in, Torrey explains how this both helps and sometimes worsens his anxiety. On one hand, he frequently jokes with his roommate, “We’re so anxious and lazy that it’s easier to have all our favorite artists play at our house.” On the other hand, he talks about the inability to escape from discomfort: “if you’re feeling panicky, you can’t really hide.”

Today, while not fully recovered from his demons, Torrey knows he’s getting there. The progress he’s made he credits to his family, music, and his community both at IU and Tweehouse. “[I] got better ‘cause I’m just lucky and had good resources, which is not the case for a lot of people.”