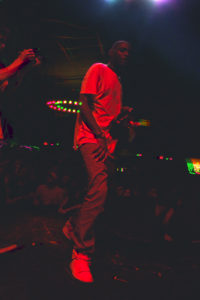 I caught up with Mr. McBean recently in anticipation of his first headlining show taking place tonight at the Chanticleer Loft. Mr. McBean is a rapper, self-proclaimed mind blower and co-founder of Smacked Records, an Ithaca based hip-hop collective.

Evan: So Mr. McBean, how does it feel to be headlining your first show?

Mr. McBean: Could you write that I’m requesting Tyler to answer all my questions? (laughs) It makes me feel like this is only the beginning.

Evan: In what ways do you believe Ithaca’s hip-hop scene has developed over the past couple of years?

Mr. McBean: I want to say that Smacked Records has come a long way this year. I also think the community has come together and become much more accepting of hip-hop because of organizations such as IU (Ithaca Underground).

Evan: What effects do you believe Ithaca Underground has had on the Hip Hop scene here in Ithaca?

Mr. McBean: I think it’s opened doors for us. IU has helped to create a-lot of opportunities for hip-hop based artists in this community to perform in new venues.

Evan: In what ways do you think being raised in Ithaca has affected the narrative in your music?

Evan: What exactly is Smacked Records and how did it come to be?

Mr. McBean: Dude, Smacked Records is history in the making.
It’s a long story if anyone cares to know I would like for that story to unfold for him or her over time.

Evan: Anything releasing from Smacked Records that we should be on the look out for in the near future?