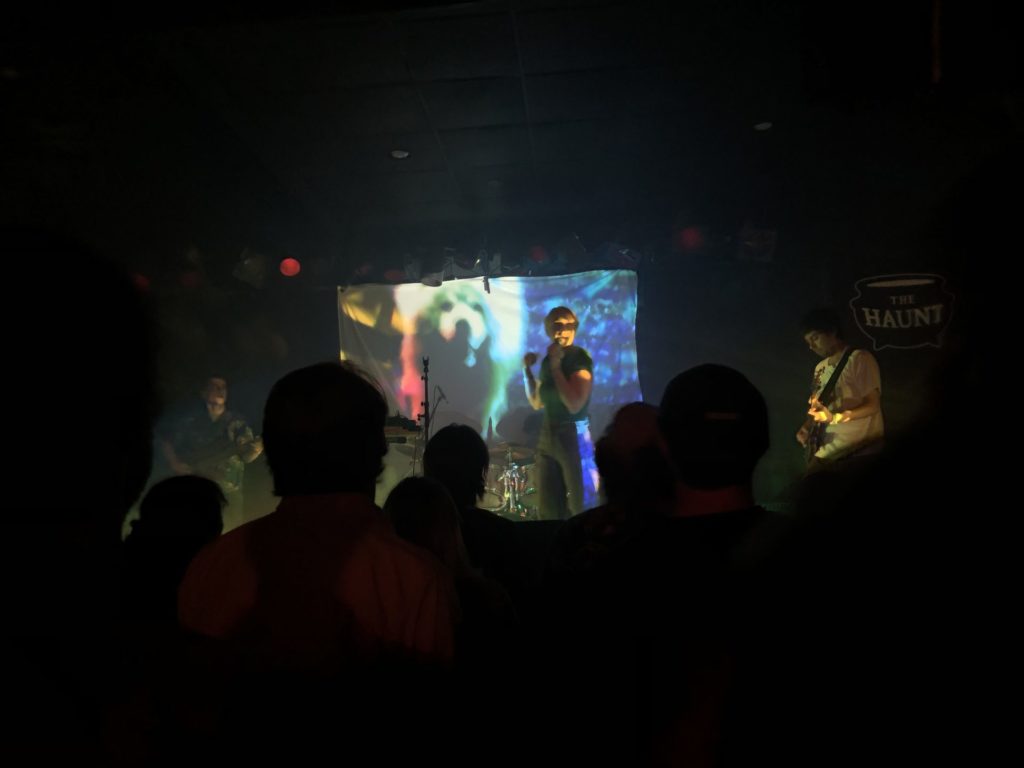 It’s the night before the full moon of Friday the 13th. The illuminated orb hung in the sky over the Haunt, beaming over the music venue. At 7PM, the crimson walls began to fill with people who were ready to have an unparalleled musical experience… one that would melt their brains. On October 12, 2019, Guerilla Toss, Empath & BRIAN brought their psychedelic, experimental, noise, and punk-rock gadgets to the stage, taking everyone who listened for an unpredictable and unforgettable trip.

“How are you all tonight?”

Bubba Crumrine, founder of Ithaca Underground and member of BRIAN!, took the stage with his bandmates. Joining him were drummer Willie B, bassoonist David Resig, and upright bassist Jordan Sands. The four of them began by singing together in unison, drawing the crowd forward and lulling them into a meditative state. Their amplitude slowly grew until they exploded into a cacophony of sound: squealing bassoon, distorted guitar, slamming drums! Then, all at once, it stopped. The first song was complete. Snapped out of their daze, the crowd applauded.

The tone had been set for the night- there were no wrong notes.

In the next song, the bass and bassoon created a groove. The amplified bassoon purred a melody, smooth against the rolling drums. The kit took the center stage, sparkling gold and serving as the main component so far. Delayed guitar strums rippled into the space, altering the sense of time.

Jordan reached behind her and picked up a book of some sort— it’s was unclear what the book was— possibly poetry or Shakespeare? With one hand wrapped around the neck of the bass and the other holding the book open, she started to read. She began in a calm narrative voice that grew into a yell, and soon, she was shouting the words off the page. They flew off with a force that punched holes in the open space. Then, she dropped it behind her and delved into an upright bass solo, her fingers moving up the neck until she got past the bridge, creating rapid, high pitched dissonance. Her bandmates followed her lead, allowing the tension to rise and sound to build until it resolved with a resounding bass note, bowed slowly on the lowest string.

“Performing with Jordan Sands on our set was such a privilege and made for one of the most fun sets I’ve played with this project,” Bubba says. “She is one of the most talented musicians I’ve ever collaborated with and she was just a seamless fit.”

“STAND TALL!” They all yelled into the mic as they began their next song, which is the first track on their album Chasms of Color & Thought. The guitar riff and bass guitar were heavy with no dominant tone to ground them. They all wailed on their instruments together, in time but not melodically in tune- just the way they meant to. The set ended with drummer Willie B crashing on all the cymbals, allowing the sound of wood hitting thin brass to spatter into shimmering silence.

“Can we have the lights dark red?”

Someone opened the backdoor and a chill from outside shivered into the room. The stage washed the Philly-based shredders in deep red, matching the crimson walls around them. The punk band started with bare bones⁠— rim clicks on the edge of the snare drum that snapped like fallen tree branches under crunched leaves.

Then, the electric guitars came into the frame. Thick with fuzz and distortion, they shook the room with crushed noise, followed by synth, keys, and a full drum kit. Lead singer and guitarist Catherine Elicson yelled into the mic, the vocals saturated in delay. It reverberated and melded into all the other instruments that were playing simultaneously.

Elicson’s body rattled with the same energy of the thrashing drums while slamming chords on the guitar. The crowd was energized with the same feeling, so much so that the front of the crowd  started jumping up and down along with her. This created a chain reaction for the rest of the audience, who all began jumping too. Soon, the crowd was a mosh pit of bodies resonating with the pulse of the synthesizers, thumping kick drum, and howling vocals.

The room was immersed in so much noise, as if television static had a melody. The band cut off the energy circuits with sharp stops and starts like slamming  the brakes on a speeding car. Yet, they jumped back in with the same intensity, always in time with each other, hardly taking a breath in between. Their music felt like a release of pent up energy, filling up everyone and everything in the space with a massive wall of sound. They ended their set with a resounding bang on the drums, saturated in the red lights above them. The crowd was left feeling jittery and electric, a perfect volley for the band that’s up next.

Empath will be on tour again in October. Their next show is on Friday, October 18th at First Unitarian Church in Philadelphia, PA.

The lights turned from dark red to a crystalline blue. A fog machine released lofty smoke onto the stage, transforming the wood floorboards into clouds. A projector screen that had been a blank backdrop now had a video of a white fluffy dog that turned into an array of kaleidoscopic colors.

Five musicians and a visual technician stepped onto the stage and hoisted their instruments: a synthesizer, an electric guitar, bass guitar, drum kit, violin & microphone, and a computer to control the projector. This is Guerilla Toss. 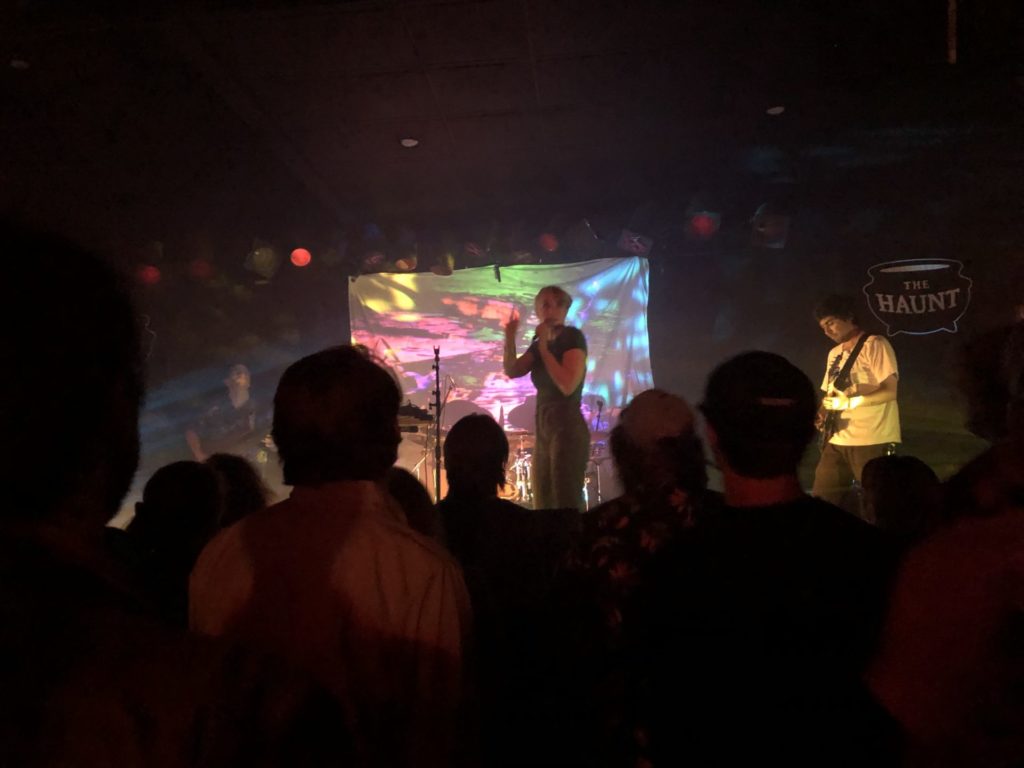 Vocalist Kassie Carlson yanked the mic off its stand and began singing through phase and delay. The words struck clearly and echoed around the room while strobe lights danced on the walls like lasers. The drums picked up the pace and the synthesizer created intense harmonics that quivered and meshed into each other. The bass slapped, shaking the subwoofers beneath the stage. As the audience’s eyes took in the swirling array of dizzying colors, the music created the same experience for the ears. The intensity of both slowly rose, mimicking the come up of a psychedelic experience. The rollercoaster ride had begun and there was no stopping it.

As the music peaked, Carlson picked up her amplified violin and started absolutely shredding on it. The drums kept the heartbeat and hit every appendage the kit had, the snare, toms, cymbals, all of them creating the continuously growing dimension. The bass thumped, the synthesizers danced, and the guitar wailed, all backing the violin that reached higher and higher. Snapshots of light and color exploded on the projector behind them, painting the auditory experience visually. Audience members jumped, swayed, or zoned out, each of them having their own individualized experience to the overstimulation.

“You! Call it! Checking! Ouuuuuuut! But I am checking in me!” Carlson yelped into the mic, starting the song “Dog in a Mirror” from their LP GT Ultra. The song was a maze with surges of energy, abrupt time changes, and unexpected starbursts of sounds. The manic tempo created a chain reaction in the audience— many began jumping up and down, their body filled with electric neon that begged to defy gravity. Saturated in the realm of sliding tunings and pixelated synths, the crowd was thrusted into the roller coaster candyland, riding on an extraordinary trip.

“I was elated we were able to open for Guerilla Toss. I’d booked them previously for Big Day In #11 and #12 back in 2015 & 2016 and caught them in Berlin this summer, so we’ve known each other for a while, but have never played together,” Bubba recollects. “They’re such amazing musicians and the nicest people. Oh, and Kassie has the best dog. I’m so glad they had William Dantzler with his visuals – it was like we were all wrapped in a big psychedelic bubble.”

Guerilla Toss’ set came to a close and the roller coaster lulled to a stop. The crowd slowly came back to Earth, still dazed. Veins still pumping neon, ears pulsing with sugar, eyes seeing rainbows, and throats raw from cheering, they made their way to the merch table. Life is never the same after a trip⁠— and after experiencing that, why would they ever want it to be?

Guerilla Toss is currently on tour- their next show is on Saturday, October 19th at Hi Dive in Denver, Colorado. The list of their tour dates are available on their website.

Kyra Skye can be reached at kyraskye19@gmail.com or via Instagram: @skyewalker0