Olivia Gatwood is The Life of the Party 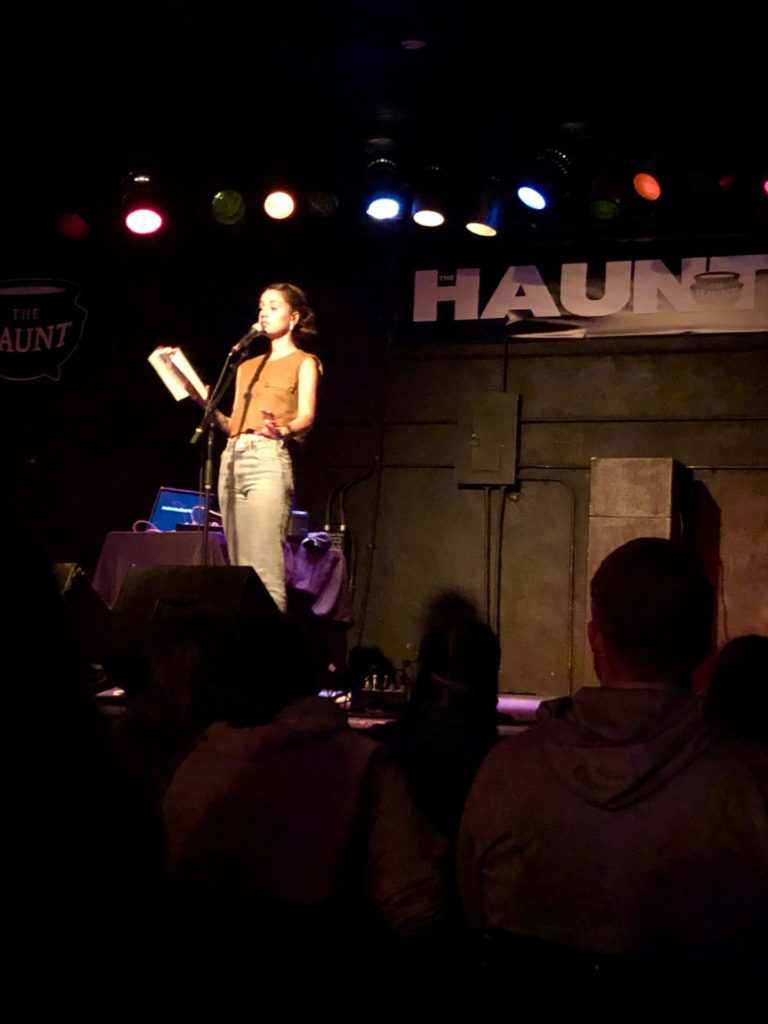 I had only seen The Haunt as a standing-only venue, so I was surprised when I saw rows of folding chairs on the main floor.  However, I knew this would be different. It was Thursday, September 26th and I was going to experience a poetry reading by Olivia Gatwood. The nationally ranked slam poet and sex-education enthusiast and activist was currently on a book tour. In the past five years, she has performed at over two-hundred colleges, reading from her published books of poems.

Joining her on this tour as the opening act was singer-songwriter Ari Chi. Chi walked onto the stage where two mics, a drum pad, and a plugged-in ukulele were waiting for her. She greeted the crowd hello and took off her Doc Martens. With socked feet, she pressed the loop pedal and created her own backing band of swirling harmonized vocals and rhythmic ukulele strums. She painted a song about a lazy Sunday, her voice reminiscent of Alessia Cara as she sang, “The sun doesn’t go down / the Earth goes around and around and around and around.” 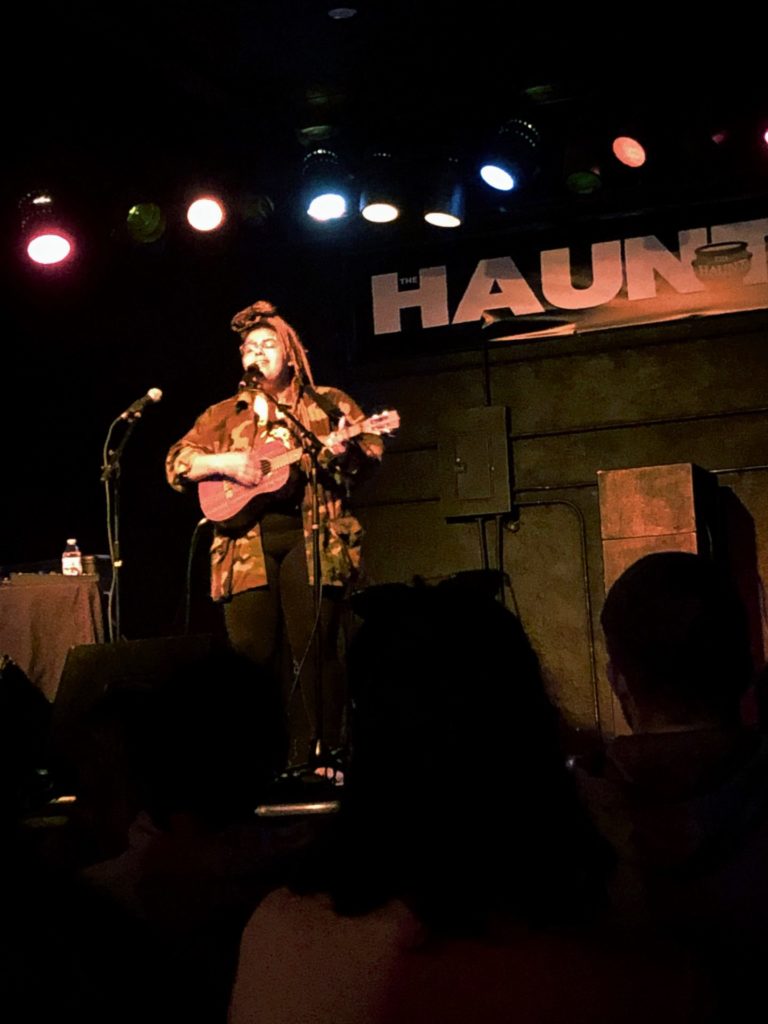 “This next song is about PTD- Post Travel Depression.” The backing vocals filled the room with reverb and she tapped the drum machine with her fingers. It felt like the lull of a rolling car driving for miles on asphalt. She added a flanger sweep to the looped vocals and ukulele, making the sounds swoosh in and out like rushing wind driving down a highway. As someone who has been on tour, I could relate. Touring is an incredible experience; it creates an opportunity to always be on the go and see new places every night with your mates. When it ends, it can be kind of jarring to go back to the way life was before the road trip adventure.

The crowd swayed from side to side, mostly in silence, truly listening. Having everyone sit down changed the vibe a lot. It made the space feel more formal, more intentional.

“Can I hear it for the ladies?” Chi asked the crowd and several audience members cheered. As she closed her set, she reminded the ladies in the crowd to “take your time day by day.” She sang into the microphone and let it continue to loop as she walked off stage. The ghostly band continued singing along until it faded out.

The soft chatter disappeared when Oliva Gatwood’s voice echoed into the room. She began her first poem called “Girl” from her newest book, life of the party. She needed no introduction— the girls she speaks of, a “good girl, bad girl, dream girl, sad girl”, are all there with her, inside of her all at once and now taking command of the stage. She held the book in her right hand and gestured with her left, the words dynamic and fluid with a steady rhythm, like a chugging train.

“Hello Ithaca, thank you for coming.” Gatwood said once the train slowed to a stop. The crowd cheered in response, still reeling from the ride. 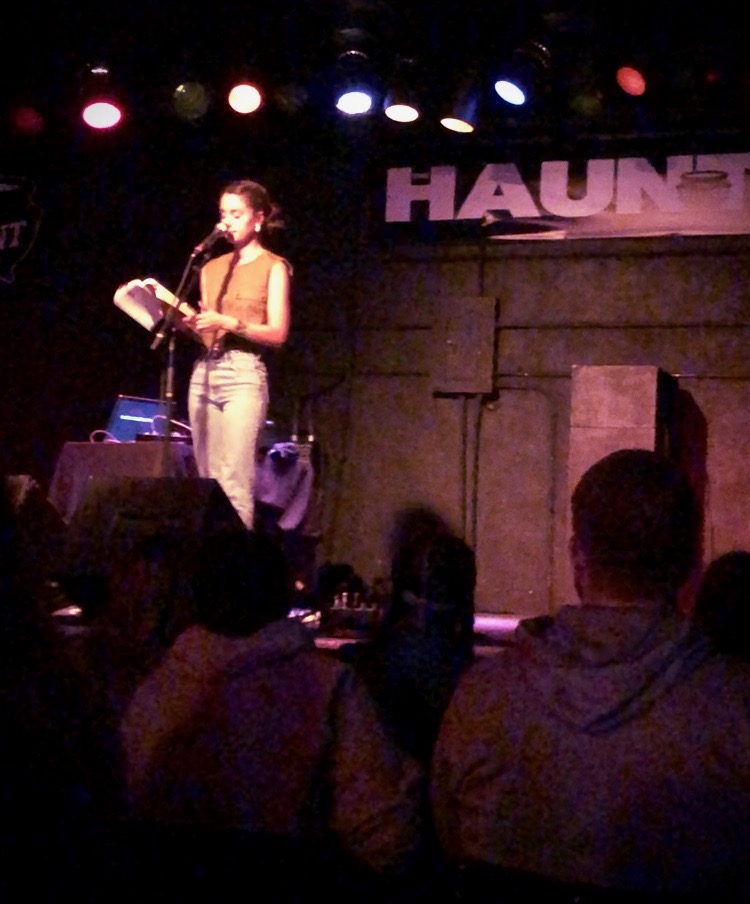 “I think the first poem called ‘Girl’ is my favorite,” Gatwood says when I asked her about her favorite poem from life of the party. “It feels… like an anthem but it still feels kinda mean in a way that I like. I wrote it much later. It’s also very rhythmic, so it’s fun to perform. All of those are elements that are important to me.”

She read poem after poem, weaving them together to create sprawingling images. I listen to each poem and see images being created in my head. The word manslaughter can be broken into man’s/laughter. She paints the picture of being harassed by her boss by a teenager and the policeman and her boss laughing about the ordeal. Laughter is about a shared joy. She reminds us how a woman’s fear can be another man’s joke. I started to shift in my seat uncomfortably and glanced at the merch table, where Gatwood has a self-defense keychain after the popularized cat-ear ones. I am reminded of why they exist.

“This book is not easy to write, probably not easy to read. If you need to take a breath, even if it’s in the middle of the poem, that’s fine.” I took a deep breath, but didn’t get up to leave. No one else does either. We all sat with our ears open, listening to what she had to share.

On the merch table, next to her published books from Buffalo Street Books, were materials from Ithaca’s Advocacy Center. Pamphlets, pens, pins, and informational cards are placed neatly on the table for anyone to take. I picked up a pen and wrote the rest of my notes for this article with it.

Her next poem entertained a hypothetical idea— what if the thought of preying on women made you succumb to a fatal disease? What if all the rapey guys died before they got to make their fantasies realities? Her humor, though a bit gruesome like the true crime episodes she binge watches, made me crack a smile.  She spoke candidly and was so straightforward with her delivery, I even genuinely laughed when she talked to the crowd about what it’s like to write these ideas and share it with the world. Laughter, a shared joy, in wanting things to be better for women. Better for all of us.

Kyra Skye can be reached at kyraskye19@gmail.com or via Instagram: @skyewalker0