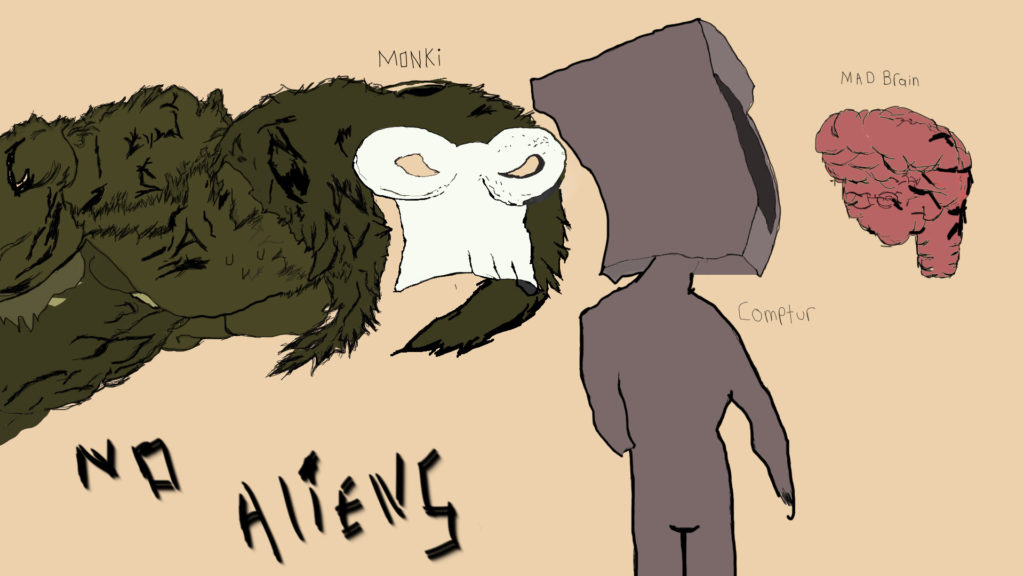 I recently caught up with Monki, the notorious noise artist, in anticipation of his upcoming performance at Big Day In, which takes place this Saturday at the Haunt. Upon sitting down with Monki, I became aware that he is actually incapable of communication. Thankfully fellow No Aliens member, Mad Brain, was present and willing to discuss: Monki, No Aliens, & their unique backstory.

Evan: Hey Mad Brain, could you explain how Monki came to be?

Mad Brain: Monki was actually once a wild monkey, abducted by scientist in order to test a new Gerber Baby Bath & Skin product. Unfortunately, due to lack of care his face was badly disfigured. Later, an uprising took place in the animal containment, which led to a fight between animals and humans. During this fight a device in the lab was activated, which coded Monki’s brain with a human scientist. After this, the animals escaped leaving Monki free to roam, fated to never find his past.

Evan: Why does Monki feel the need to create music?

Mad Brain: In his case, the music is a search to call on something that can’t be particularly seen. It’s primal, every noise and sound you hear in his music expresses his story. Even though his [Monki] level of intelligence is considered genius, he is still unable to communicate.

Evan: No Aliens, what exactly is it and can you tell me about the other group members?

Mad Brain: No Aliens is a three person collective comprised of Computer, Monki, and myself [Mad Brain]. Monki created Computer, similarly cursed with a high level of self-awareness, he is better able to cope due to his ability to communicate. Computer is also responsible for all production for No Aliens, his music specializes in trance & ambient loops. His inspiration includes Brian Eno, Miles Davis, and Soulja Boy.

Evan: I [Mad Brain] am the voice behind No Aliens; I’m responsible for the lyrics and expressions where Monki fails. Typically, when you hear rapping in our [No Aliens] music, that’s me. I was once a scientist, whose mind was fused with Monki, leading to a constant struggle for control of this body.

Evan: Has Ithaca Underground helped you find a sense of community?

Monki: For the time being, I suppose so, but the point of No Aliens is to never have one home.