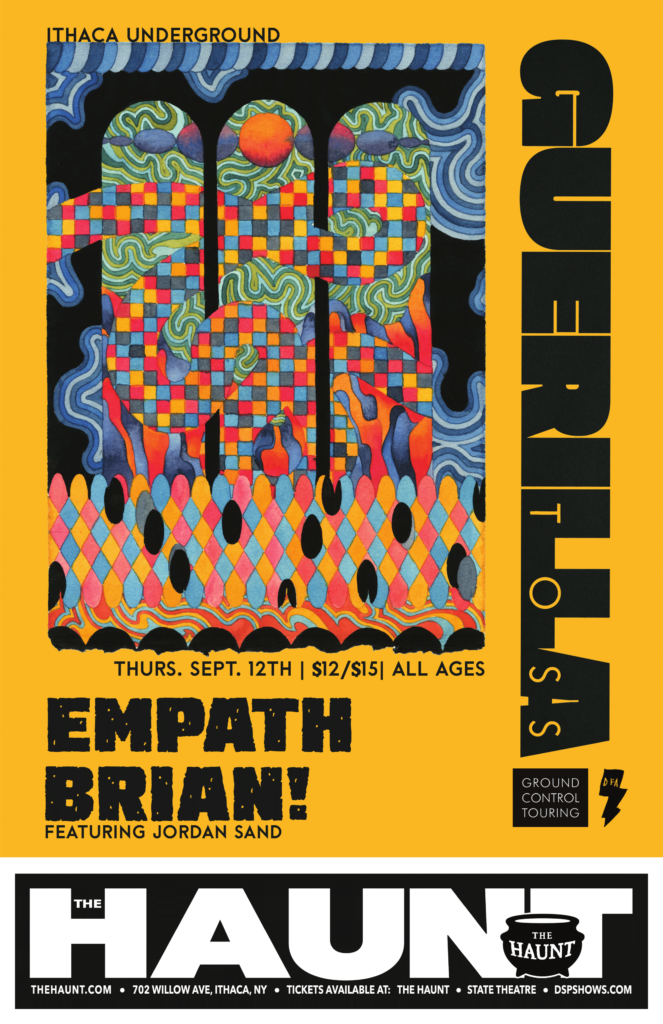 This Thursday, September 12th, get ready to have your brain melted. Guerilla Toss, Empath & BRIAN are bringing their psychedelic, experimental, noise, and punk-rock gadgets to The Haunt.

BRIAN is a rock and avant-garde trio led by Bubba Crumine, one of the founders of Ithaca Underground. They bring a multitude of vibrations and instrumentation, including guitar, amplified bassoon, drums, and vocals. The bassoon adds a classical element that purrs a melody, but isn’t meant to be stabilized- as much as it can paint straight, fluid brushstrokes, it also can make jumping squiggling lines, adding to the chaos and electricity of the band. BRIAN feels like a film score that meets a hard-rock sensibility.

Empath are Philly based shredders that are not afraid to make noise. Currently on tour with Guerilla Toss, they are bringing all sorts of sounds with them. Whether that be distorted guitar, static, thrashing drums, or recorded bird sounds, it all gets mixed together to create one massive wall of sound. The punk band fills the space with fuzz and dissonance, melding everything into one swirling color. The jittering sound waves stimulate a feeling that’s unmatched.

Guerilla Toss, founded in Boston, MA and now based in New York, NY, slap their sound with neon streaks and dizzying, oversaturated colors. Their manic, high-paced energy passes through synthesizers, time-signature changing drum beats, and fat bass tones. The music phases in and out, sliding up and down scales without tiptoeing around dissonance. The sparkling vocals along with video-game like pixels create a roller coaster candyland- it’s a ride you won’t forget.