Summer School: Class is in Session! 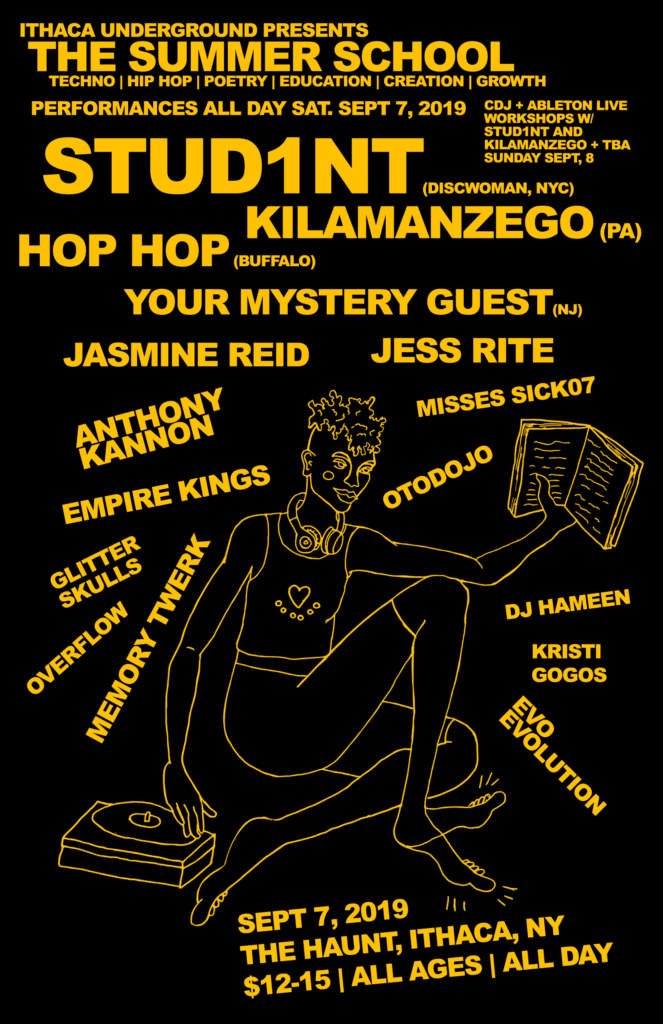 It’s a Saturday afternoon and today’s class is being held at The Haunt. Depending on what time you walk in, you may encounter a variation of three vibes: hip-hop, techno, or spoken-word poetry. The event is called Summer School and is founded by Ithaca Underground coordinator, Chris Knight. It features artists from a multitude of places and genres, creating a unique experience.

When I arrived, spoken-word poet Memory Twerk was on the Main Stage. She intertwines her biting poetry with sections of singing, weaving a musical component into her craft. She shares one story, “Caca de Luna”, that talks about taking what is old and watching it grow into something new. A mixture of culture, language, poetry, and music, Memory Twerk gave me the first taste of what I would experience at the showcase.

Afterwards, Glitter Skulls, (a.k.a Chris Knight and formerly known as Robot Detective) sets up his synthesizer and colorful array of wires for his electronic set. The music opens with repeated bells that echo, reminiscent of the school days when the day was finally over. A drum machine begin to set a steady beat, thumping and reverberating like a heartbeat. Swooshing sounds of winds and a sweeper effect start to create an airplane sound; it feels as if it could be flying directly overhead. The bright red wires that connect his electronics match the red walls behind him on The Haunt’s stage. Knight creates a sonic world with each note adding a new element to the story.

Techno artist Otodojo soon joins him on stage. The airplanes from Glitter Skulls’ set fade into Otodojo’s melodic dreamscape. With the help from two Pioneer turntables and a laptop, he paints imagery that feels like exploring the sky through a virtual reality headset. Sparkling cymbals twinkle like the stars in the night sky and the soothing melody feels like soaring through clouds, each one fluffier and more complex than the next. The song paints the new world so well, reminding me of the video games I would run to and absorb myself in after a long day of school. It feels good to reminisce on the memory, even if just for a moment.

Afterwards, I make me way outside to check out the next stage. The stream flows gently underneath the dock and the September sun peeks through fluffy clouds, reminiscent of the ones I visualized in Otodojo’s set. People sit in wooden booths as hip-hop artist Overflow gets ready for his set. Once he begins, the quiet ripples of dock get energized. Overflow shares a song called “Bad Mood”, rapping to his backing track and adding harmonies to the chorus. He perfectly captures how it feels to be frustrated and irritated, mentioning wanting to be left alone and how even the warmest intentions can’t lift us when we feel low. I had personally been in a bad mood earlier in the day, and hearing this song was validating for me- and it definitely left me in a better mood! Overflow continues his set with more songs with different styles, one of them called “Rooftops Contemplating” where he expresses that he is a poet by trade.

Performing inside on the Main Stage, at the same time as Overflow, is spoken-word poet Jasmine Reid. She opens her set with a question: where do dreams go? She proceeds to read her poems slowly and carefully, clearly expressing where the line breaks are. In her poem “Little Factory in My Head”, the pauses add space to the individual images she creates- each line break feels like different compartments that have been sectioned away in her mind space to help make sense of the world.

Every so often, someone opens the door from the dock where Overflow is performing at the same time. When this happens, loud, hyped-up music from the hip-hop concert flows into the intimate and delicate space that Jasmine is creating. She pauses for a moment and lets the other vibe pass before continuing. These two very different performances are happening at the same time and give the audience options to flow between each of them, getting to access different types of artistry and different types of crowds. While the audience gets to explore these vibes, this also creates moments for the artists performances to directly interacting with each other.

The last artist I have the opportunity to witness is HopHop! The Buffalo native hops onto the stage, her green hair pulled into small pigtails and mic in hand. Her stage presence and facial expressions match the vibe of each of her songs- and they’re all very different. In one, her singing is smooth and mellow like Jill Scott. In another, she, takes full command of the stage and the audience, with a rapping style reminiscent to Sammus.

“There’s no such thing as a typical girl,” she states. Her music truly represents that, showing the many layers of what it means to be an artist and person with a multitude of identities. It’s also something I take with me when I think about the showcase- a mix of genres and artists brought together a unique collection of people to the event. Having  spoken-word poets, techno-based DJs, and rappers in the same space creates an atypical type of space. It’s one that brings people together to explore different parts of themselves. For my first and last day of summer school, I was reminded that it’s okay to be different, it’s okay to explore new things, and that we always have much to learn for each other- all we have to do is listen.