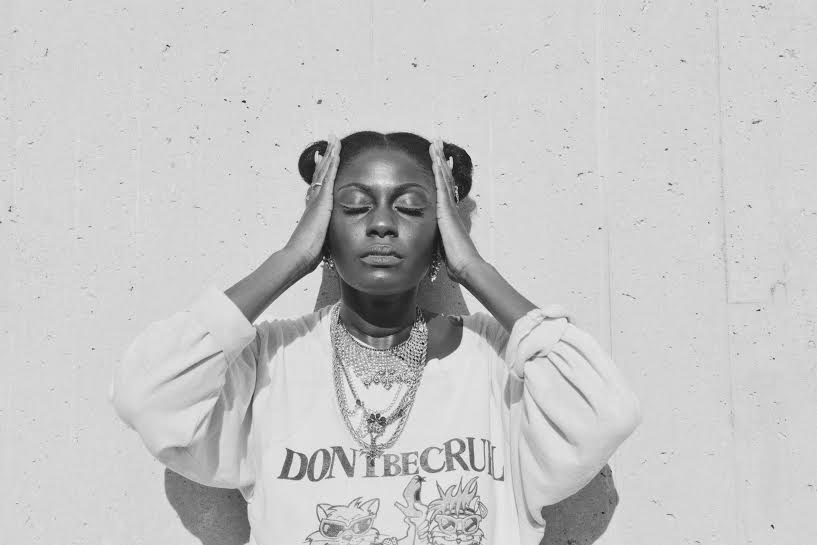 I caught up with Enongo Lumumba-Kasongo, better know as Sammus, in anticipation of her upcoming release show for her latest EP, “Pieces In Space”. The album will be her first release with Don Giovanni Records and is available for purchase on October 28th. Produced entirely by Sammus, “Pieces In Space” features: Jean Grae, Homeboy Sandman, Open Mike Eagle, and Latasha Alcindor, as well as label-mate, Izzy True. Besides her career as a musician, Sammus is working towards a PhD in Science and Technology studies at Cornell, serves on the Board of Trustees at Ithaca Underground, and is a founding member of Black Lives Matter Ithaca, among other things.

Evan: Sammus, you’ve mentioned early memories of producing music on the MTV Music Generator, which was a popular game for PlayStation. Recently, you’ve stated that producing your own instrumentals has been critical in your music. What impact do you think video games have had on your production style?

Sammus: Video game music has informed my production style primarily in that I see a piece of production as more than just background music for vocals. I believe a beat should be able to stand on its own as an enjoyable and engaging piece of music.  So I always try to make my beats dynamic whether it’s incorporating a variety of melodic flourishes or subtle changes that can only be heard on headphones. I want my beats to paint pictures just like some of my favorite video game tracks have done for me.

Evan: Alex Trebek recently caused some controversy with his comments surrounding nerd-core music. I saw you, along with a few other rappers, recorded a response track. What do you think would cause Trebek to make such comments?

Sammus: I’m not actually sure why Alex Trebek would make the comments he did. It seemed uncharacteristically snarky to call nerd-core music for “losers” but it’s pretty obvious to me that he was joking around and I hope that people who listen to the response track recognize that it too was made in jest. I do think his words struck a chord with folks because although I’m ambivalent about using the term “nerdcore” to categorize my catalog, nobody can deny that the genre has produced a rich scene full of artists and incredible supporters who have worked hard to build a space for themselves. Some of my biggest supporters have been people who found me through my more “nerdcore” tracks. I have friends who identify as nerdcore artists that are making a full-time living performing their music across the country. Nerdcore has such a significant following, that for the past several years SXSW has seen fit to give nerdcore musicians an official showcase—So yeah, anybody who took issue with Trebek was probably taking his comments to be a dismissal of a genre that has found a lot of love with a lot of great people.

Evan: You’ve recently aligned with Don Giovanni, a label specializing in punk music. Are there any areas you draw similarities between Hip-Hop and Punk music/culture?

Sammus: First, I think punk is largely about incorporating and celebrating a kind of sonic rawness in the music. The centrality of rawness as an aesthetic can certainly be found in hip-hop circles, whether in live performances, in recordings, or in the very practice of putting a song together. On a personal level, I believe in utilizing my rawness as a way to engage audience members — I think anybody who has seen me live would agree that I give all of myself to each and every performance.

Additionally, I think that the DIY ethos that is the heart of punk music/culture is just as deeply embedded in underground hip-hop spaces. I never thought of my work as DIY until I became a part of the Ithaca Underground scene. It was then that I began to associate being DIY with the creation of music on one’s own terms. I realized that even though the sounds were often different, the values that went into making my music and the punk music I heard at IU shows are very much the same.

Finally and perhaps most importantly, many forms of punk and hip-hop music are rooted in culturally critical political discourse and activism. One need look no further than the powerful messages behind songs from bands like Downtown Boys or punk legend Alice Bag to see the connections with politically-minded hip hop artists. Themes of resistance, cultural pride, and rejecting the status quo have all been integral parts of the definitions of both of these genres/cultures.

Evan: Over recent years you have been very active in integrating Hip-Hop performances into Ithaca Underground shows. Any specific performance(s) come to mind, which you are especially proud of?

Sammus: One performance that was really special emerged out of a collaboration between Ithaca Underground and the CFCU Summer Concert Series hosted by the Downtown Ithaca Alliance. For the first time since the inception of the Summer Concert Series, the Downtown Ithaca Alliance reached out to Ithaca Underground to host the concert on the Wednesday before Grassroots. Although typically this date had been given to an artist performing at Grassroots, both Tatiana Sy, the Concert Series organizer, and Bubba Crumrine from IU decided to prioritize artists who were not going to be on stage at Grassroots. I was so honored to be selected to headline this show—it made me reflect on the lack of opportunities I saw for weird hip hop to flourish when I first moved back to Ithaca in 2011. And when I contrast that with my set at the Concert Series, in which I got to rap in front of so many different Ithaca residents, I realize that I’ve played a role in changing the kind of music that this town prioritizes. It was exciting to share my raps as well as talk about the importance of Black Lives Matter and Ithaca Underground to me to a captive audience of folks, many of whom may never have seen me otherwise. That moment was really important to me.

Evan: On your single “Weirdo” you speak about being an introvert, however you seem to be involved in many different communities. As a student myself, I’m curious: how do you maintain your mental health while balancing a career in music, working towards your PHD at Cornell, serving on the Board of Trustees at Ithaca Underground, among other things?

Sammus: It’s been challenging to keep all these things together because my preference is generally to be on my couch being weird by myself or with my boyfriend. So, I take self-care time where I can find it. For example, I often use my performances as a space to get certain things off my chest. I’ll tell the audience how I’m doing —if I had an annoying issue I had to deal with in class or if I’m stressed about the state of things nationally. I also have gotten much better at saying “no” although it might not seem like it. There are quite a few times that I’ve turned down opportunities because I knew it wasn’t in the best interest of my health. A few years ago I took any gig that was offered to me but now I make sure that I have enough time in my schedule and that it’s going to add something substantial to my life before I accept. Finally, I would say that sometimes the work itself can be a form of self-care. Yes, meetings can be exhausting, but it’s exciting to talk about the future of music in Ithaca with other volunteers and artists or in the context of my work with Black Lives Matter, it’s energizing to have conversations and plan actions that will result in a safer world for black people.