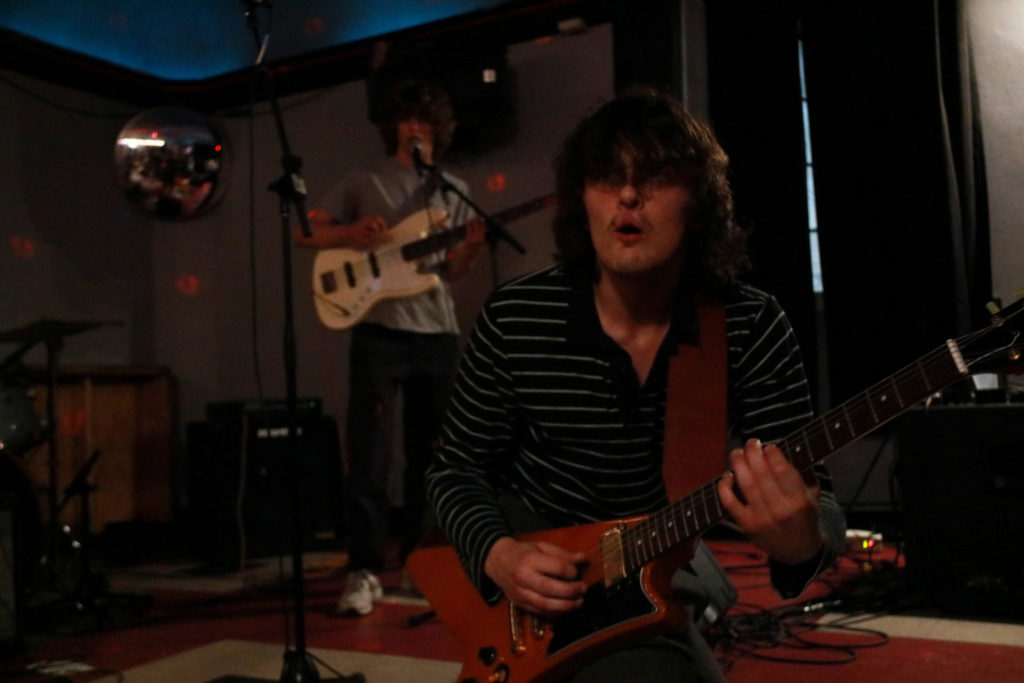 On Saturday, November 16, The Chanticleer was ramped into an all-ages punk show! This was the second collab between Ithaca Underground and Goo Lagoon. Even though the house venue no longer exists, the energy of Goo Lagoon could still be felt here. There was no punk-time, meaning the show started right on-time at 8PM. College students, locals, and anyone that found their way into the Chanticleer, ran up the stairs so they don’t miss out. Godcaster, Winter Beach, and Tilling were there, ready to stomp on their fuzz pedals and send everyone into a good time. 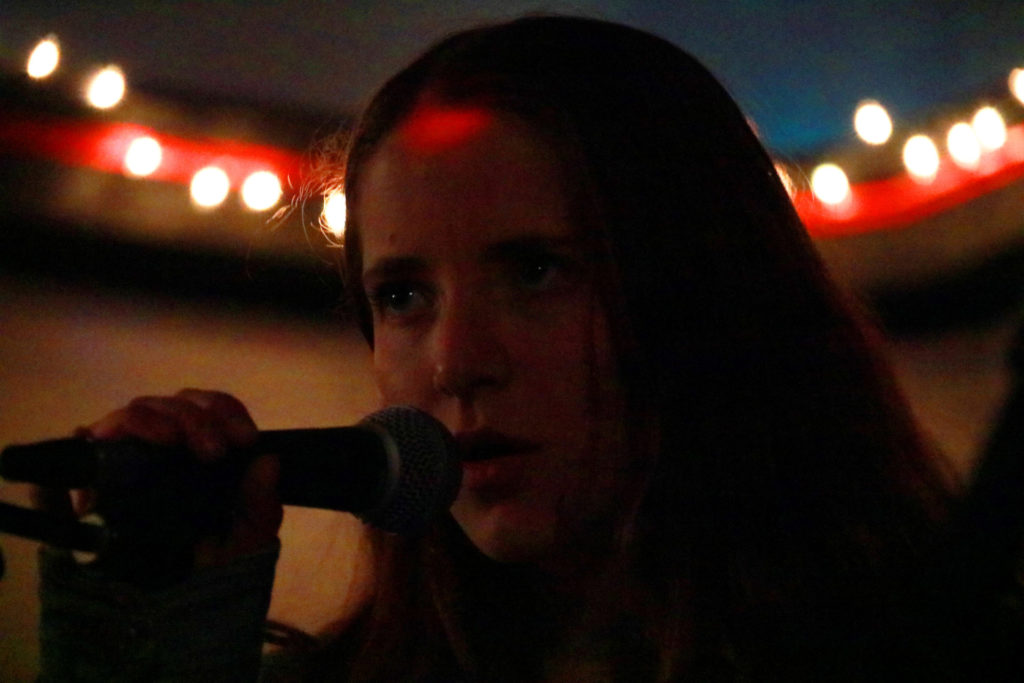 Kal Hertafeld took hold of the mic and stared into the growing crowd. Static began building around her from the overdriven guitar, getting louder and louder… until! She yelled into the mic, her voice slightly distorted against the overdriven electric guitar and clip-gained drum machine. Fearless and unrelenting, you’d have no idea that this was Tilling’s first live performance. 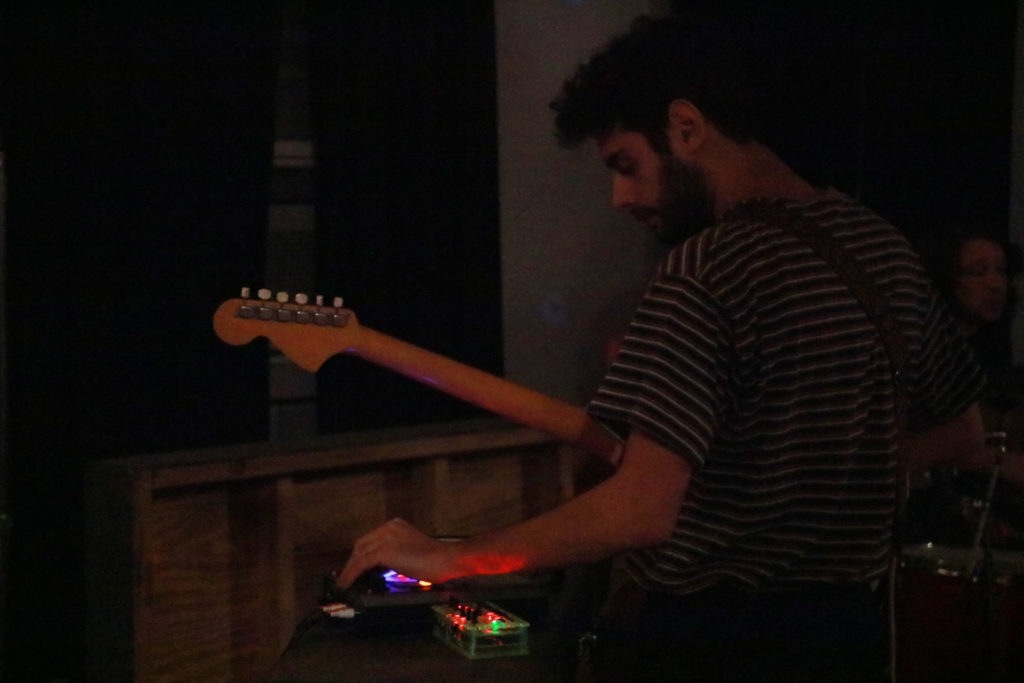 Sam Unger played guitar while also operating a drum machine. To fill out and add depth to their already beat-driven music, Colin Boyd slammed on the drum kit. All three members are Ithaca College students and are a part of Goo Lagoon. They not only helped make this show happen, but were also added their own art into the space. 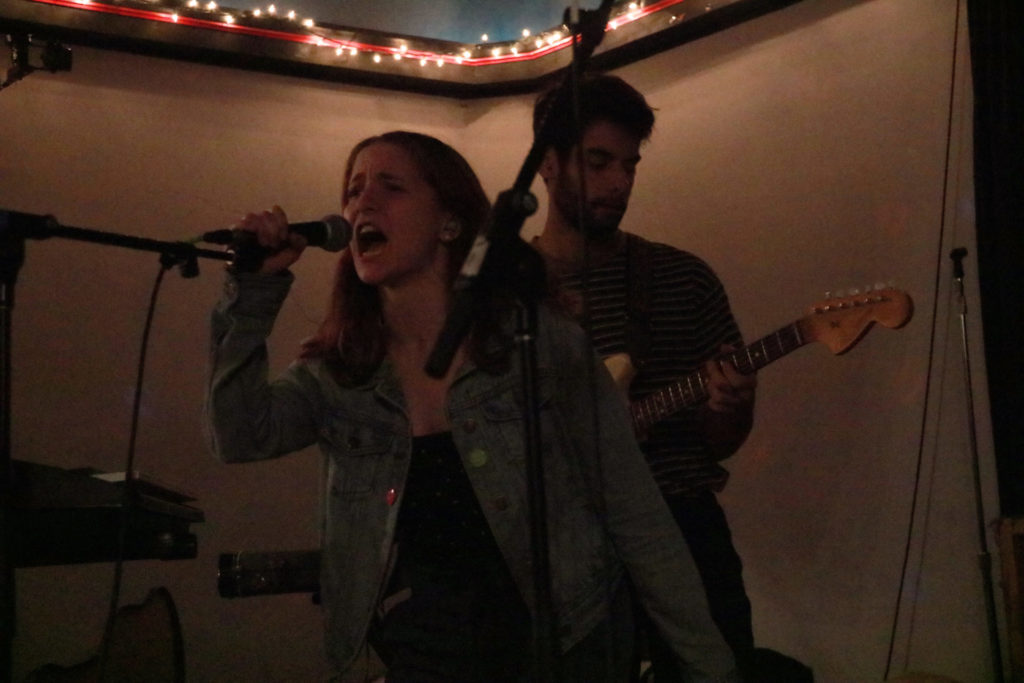 Tilling’s sound had no volume limit. The screeching feedback from the guitar felt right at home with the mechanical nature of their sonic landscape and Kal’s punchy vocals. The release of pent of energy exploded into the room and the crowd responded by jumping up and down to the beat. Lined with fuzz and streaked with electronic drum beats, their distorted sound felt like a miswired fuse in a video game. That fuse sparked and sputtered into the attic of The Chanticleer, sending electric shocks into the audience.

The audience’s bodies were still jolted with energy when their set concluded. This was just the beginning of the electrifying experience that the evening would bring.

You can listen to Tilling’s self-titled EP here. 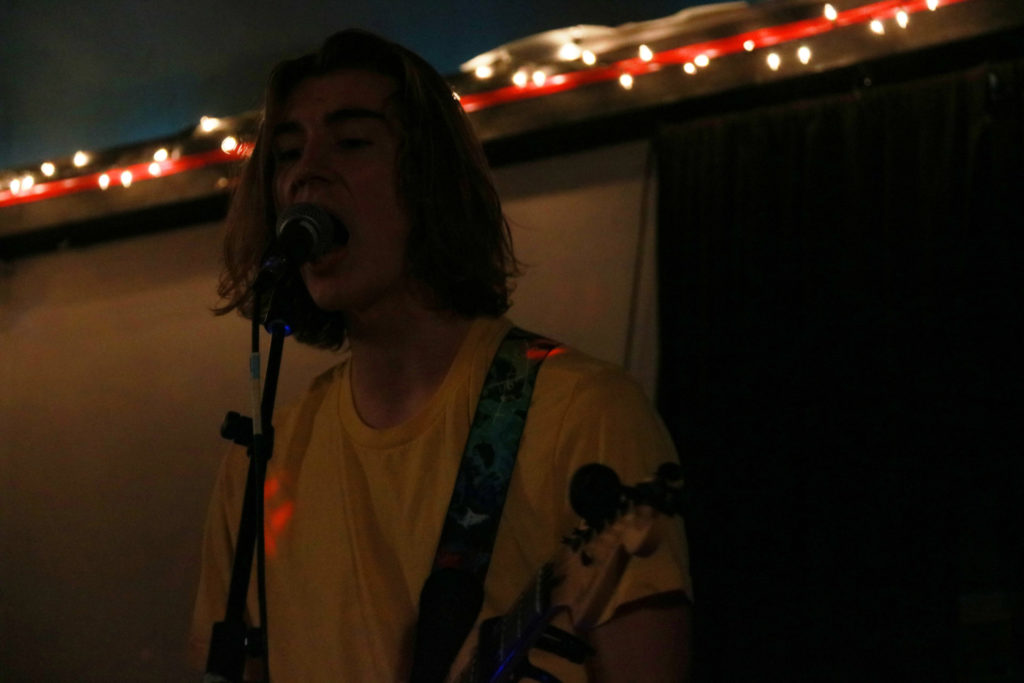 Luke Anaclerio, the frontman, wore a yellow shirt that was as bright as the sun. His singing voice was relaxed, but came out a little rumbly because the lyrics were slightly screamed. It reminded me of tumultuous ocean waves that crashed onto an otherwise calm sandy beach.

The keyboards sounded watery and fluid against the clean tone of the guitar. In “Creepin’” the keyboard took a solo that everyone enjoyed and danced to. A mix of surf rock and a phased keys, the music was so much fun to experience.

“We also have free stickers! Go grab one!” Anaclerio yelled into the mic. Many people rushed over to the merch table to go get one. Before the night was over, all the stickers were gone.

Winter Beach ended their set with “Service Dog”, their newest single. As soon as the drums crashed in, the audience started head banging, shaking their hair back and forth like palm trees. Once the song got to the chorus, everyone started jumping around until it became a mini mosh pit! 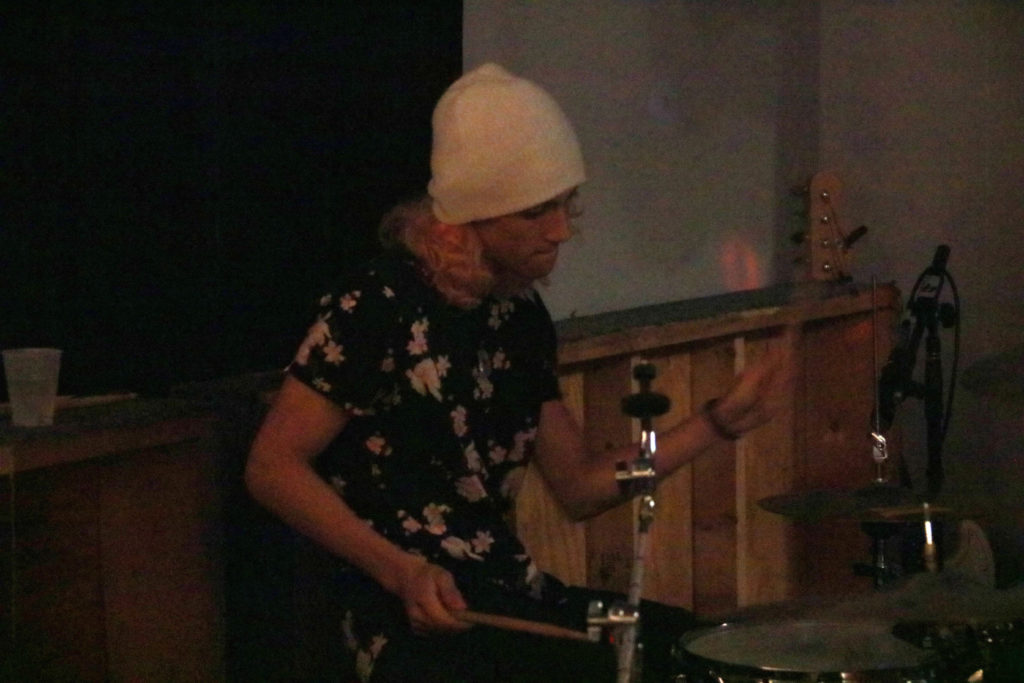 Even though everyone was knocking into each other, they were also catching and hugging one another to make sure nobody fell. It was the most loving mosh I had ever experienced and it reminded me of the shows in Goo Lagoon’s attic. Goo Lagoon was a physical location, but more than anything, it was a feeling. It’s the people that create these spaces, and those people, along with new faces, were here. My cheeks hurt from smiling so much.

You can listen to Winter Beach’s discography here.

The band members of Godcaster stepped onto the tiled floor and adorned their crowns–and by that, I mean their instruments. They began without warning. The bass guitar thumped and created a groove for the rest for the band. Frontman Judson Kolk immediately took command of the space, kneeling onto the ground with his electric guitar. There was something inherently theatrical about their introduction that reminded me of the glam rock era of Queen.

However, there’s more to Godcaster than just this! Bassist Von Kerr suddenly pulled a flute out of nowhere! With her bass still strapped on, she started playing vivaciously, picking up speed to match the sudden tempo change that the rest of the band adorned. The flute trilled relentlessly and added so many notes to the growing wave of sound. 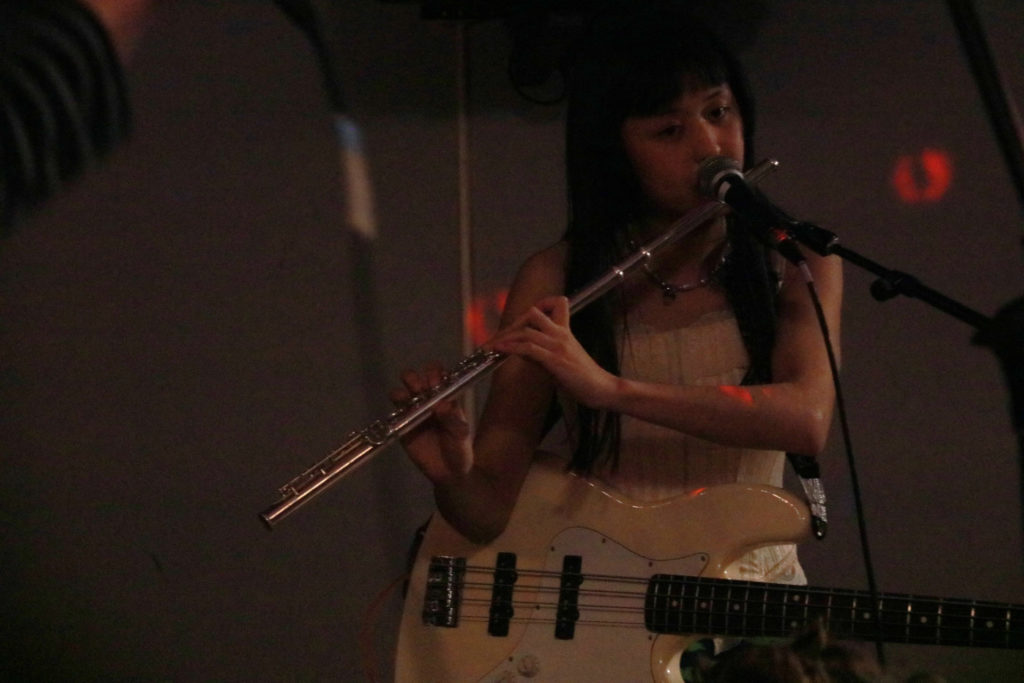 The song they were playing changed time signatures effortlessly, still fast paced but moved through different rhythms. It reminded me of the organized chaos that Guerilla Toss’ created with their time signature changes a few months ago at The Haunt.

The song lulled to a stop and into the easing melody of “Sassy Stick Boy”. The audience swayed back and forth to the music, relaxing into a steady pace. The flute was calm and reminiscent of a song that could be on a Pokemon video game soundtrack. However, just as quickly as the song came, it dipped right into the fast-paced, punchy “Groove Station.” Kerr walked out into the crowd and started dancing with everyone, which made the crowd so excited! By the time the music had reached its peak, the crowd was moshing with each other again. 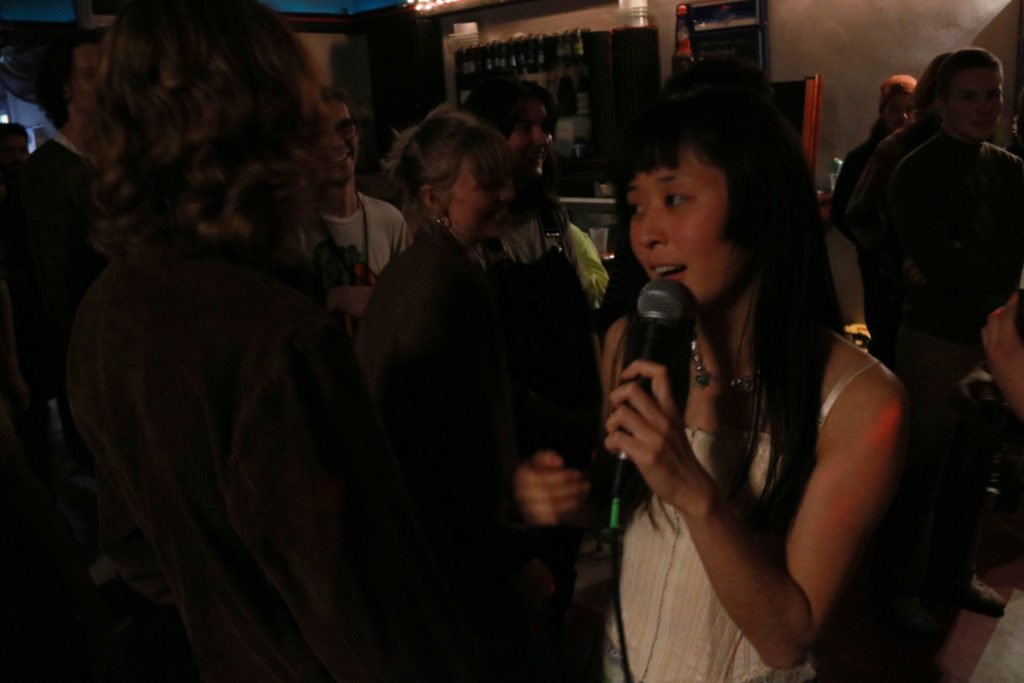 Kerr walked back to the band in time for Kolk to yell a count off of: “1! 2! 3! 4!” and then they all started playing at the same time. At this point, it was very unclear where and when songs were stopping and starting. The Brooklyn-based band brought the New York City subways with them: the flute was going crazy with random notes, the drums were slamming and there was the screeching feedback of the electric guitar.

“1!2!3!4! “ Kolk yelled again and they all jumped right back into the cacophony of sound. Kolk kneeled down and he started screaming. The whole band backed him as he wailed into the microphone, unfurling anything that has been held inside. There was so many random things happening, that I could only tell when songs were starting and ending because of the countdowns and when Kolk yelled, “THANK YOU!” These interludes ranged from 30 seconds to several minutes long. I wasn’t totally sure what’s going on, but I knew it was something I had never experienced before. 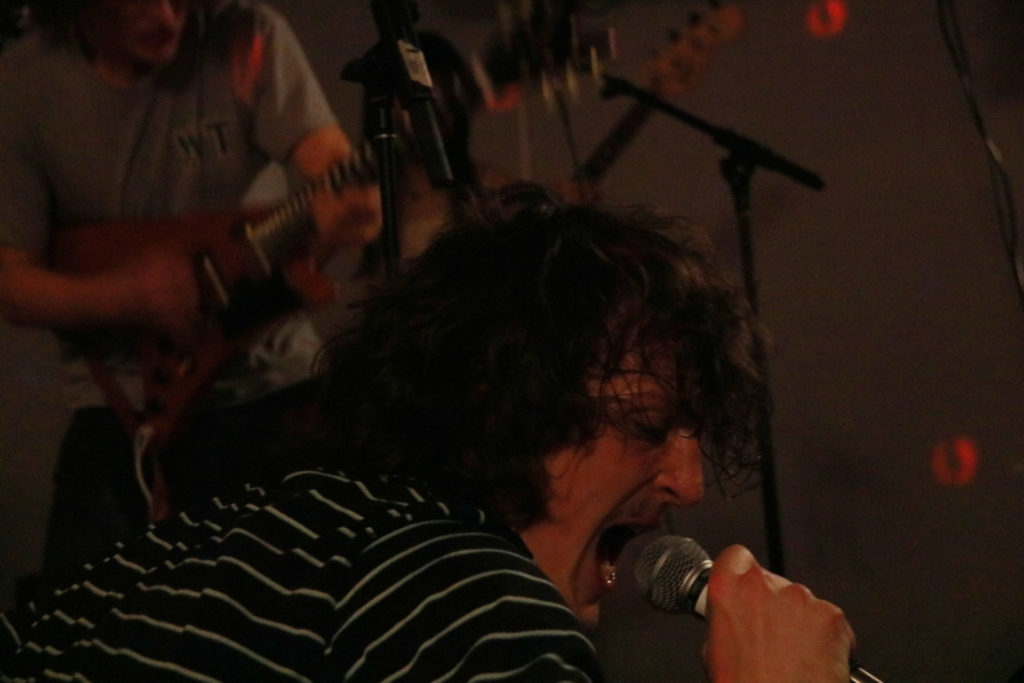 “THANK YOU!” Kolk yelled after the final song. I had whiplash from moshing, head banging, and from the sharp starts and stops of their sonic subway train.

The show ended at 9:3oPM, which meant the night was still young for us punk-rockers. Feeling as theatrical as if we are all Godcasters of our own, we laughed down the sidewalk, bringing the echoes of a good time with us.

You can listen to Godcaster’s discography here.

All photos taken by Charlie Wildey.

Kyra Skye can be reached at kyraskye19@gmail.com or via Twitter @skyewalker0