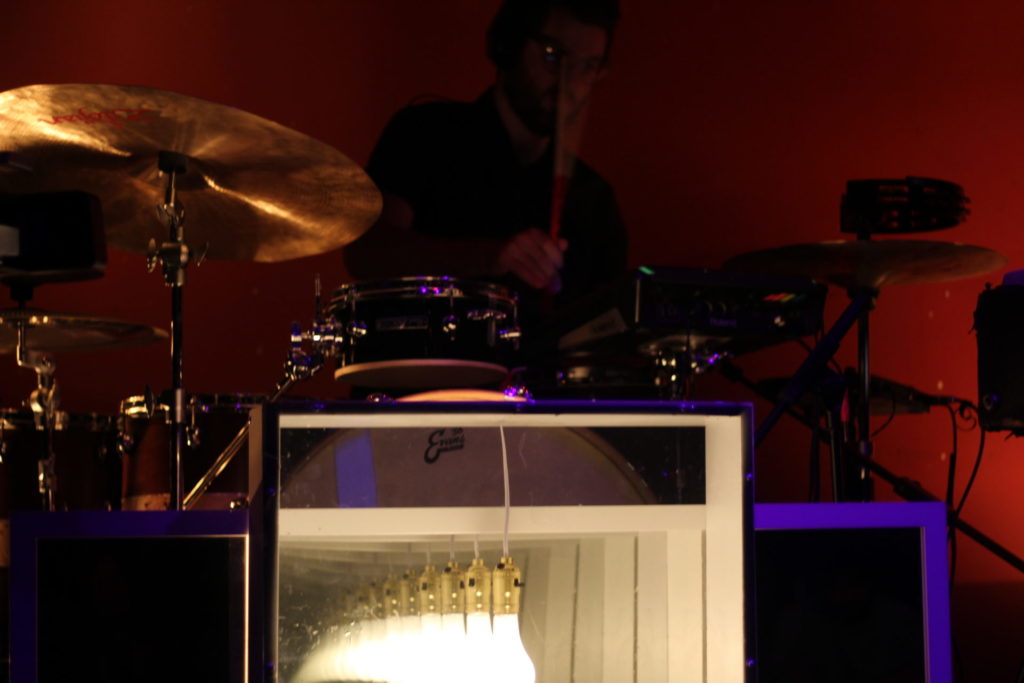 On Sunday, November 10, the light bulbs in Casita del Polaris came alive and welcomed four electronic and chill-wave acts. Among them was noise artist bit rot, experimentalist Lala Funstar, chill-wave duo mmeadows, and headliner Square Peg Round Hole. The stage was covered in wires and electronics instruments, all of it humming with anticipation for the spectacle that was about to come. 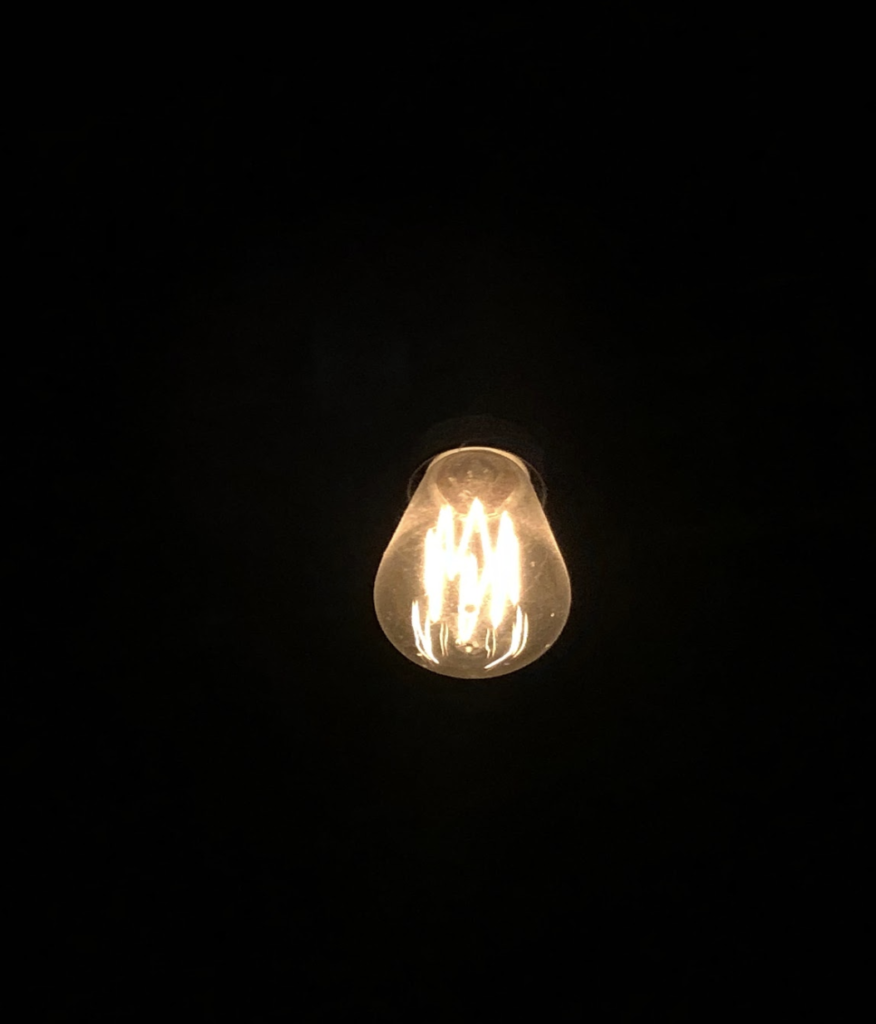 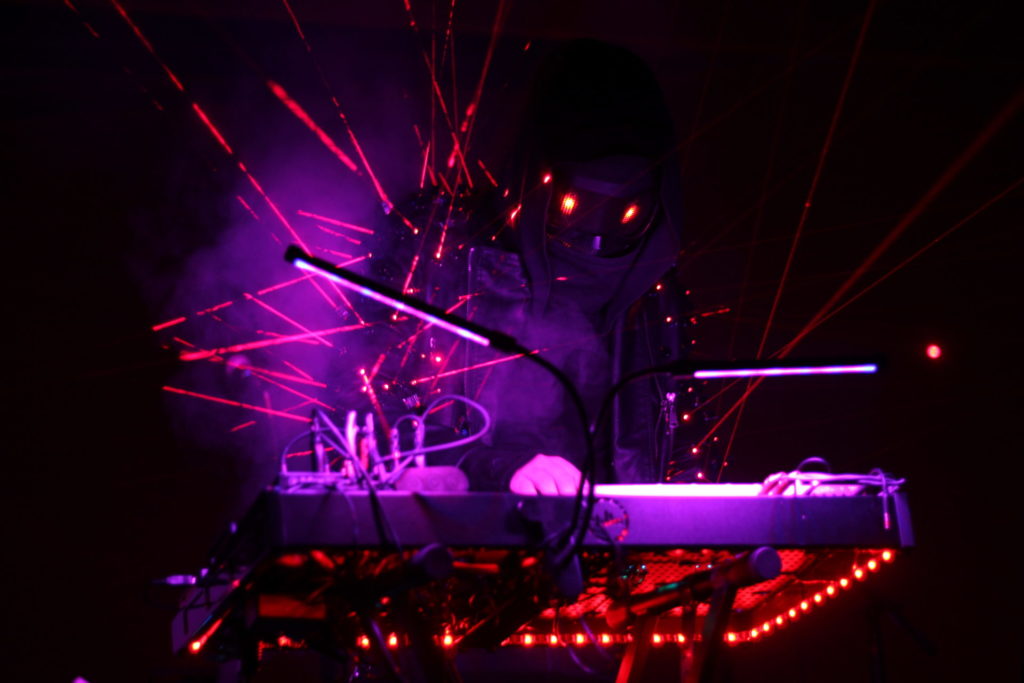 The floor rumbled as bit rot’s machines turned on. The oscillating synthesizers whirled up… and then laser beams shot out of their jacket! Bit rot was level with the ground, so everyone in the audience was electrified with the red lasers that protruded from their mask and cloak.  Like a necromancer of digital ghosts, a cloud of smoke appeared behind them as they used their powers to summon a collection of digitized sounds. The ghosts came to life all around us. 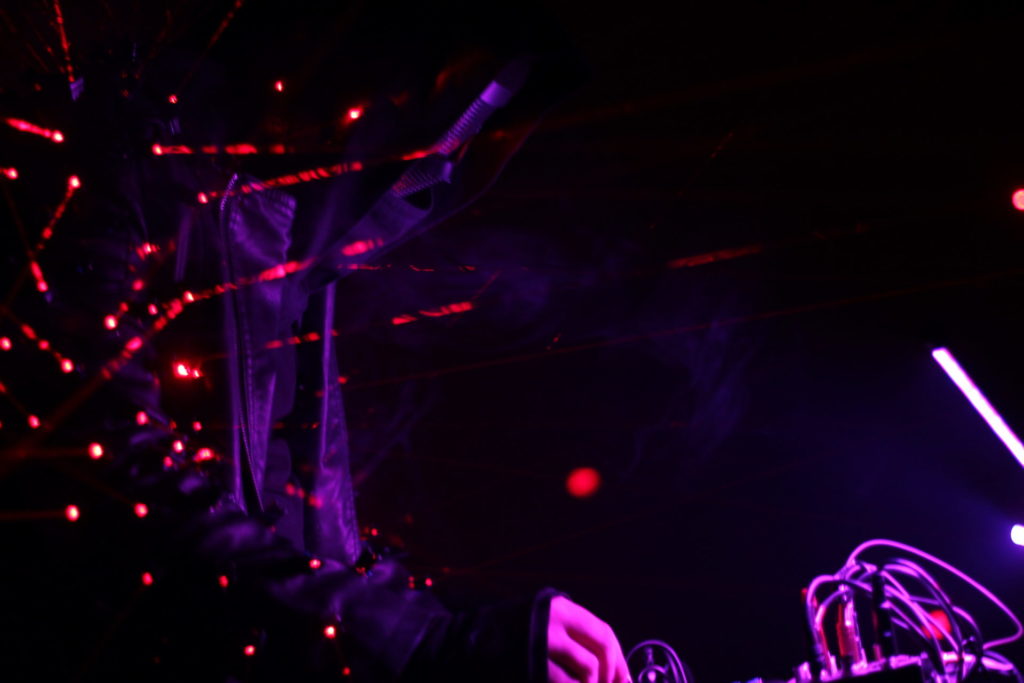 The pulsing synthesizer went up and down in pitch through arpeggiated loops. Adding even more depth to it, a shower of glitching sounds was added, creating a technicolor storm of grittiness. The consistent booming and the ominous ambiance filled the room with a ghostly presence that Casita del Polaris had never felt before. Goosebumps rose on my skin and shivers danced down my spine.

At the end, bitrot unmasked, revealing the human underneath. “Thank you,” they said and the ghosts were slowly laid back to rest.

You can find bit rot on Bandcamp here. 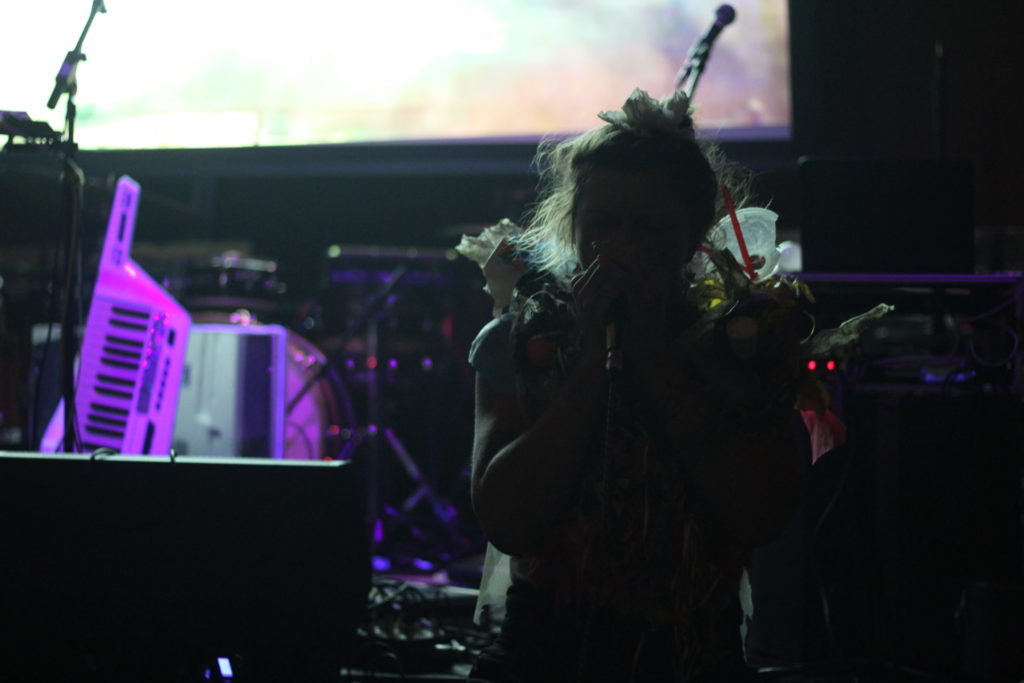 A projector screen was lowered behind the stage, displaying moving images of the sky, foggy woodlands, and trees. Lala Funstar knelt on the floor in front of it. Her body was covered in garb of what you might find in the woods these days: plastic wrappers, tissue papers, battered cloths, feathers and a discarded slushie cup and straw.

With the press of a button, she triggered and welcomed pre-recorded sounds. Tweeting birds, whistling humans,  barking dogs, and howling wolves filled the room. She grasped her hand around the microphone and responded to the wolves’ cries with her own. Her vocals echoed and became a part of the woodland landscape. She added in a kalimba, which sounded like the melodic plinking of rain. The piece was held together by a beat she created by beat-boxing. 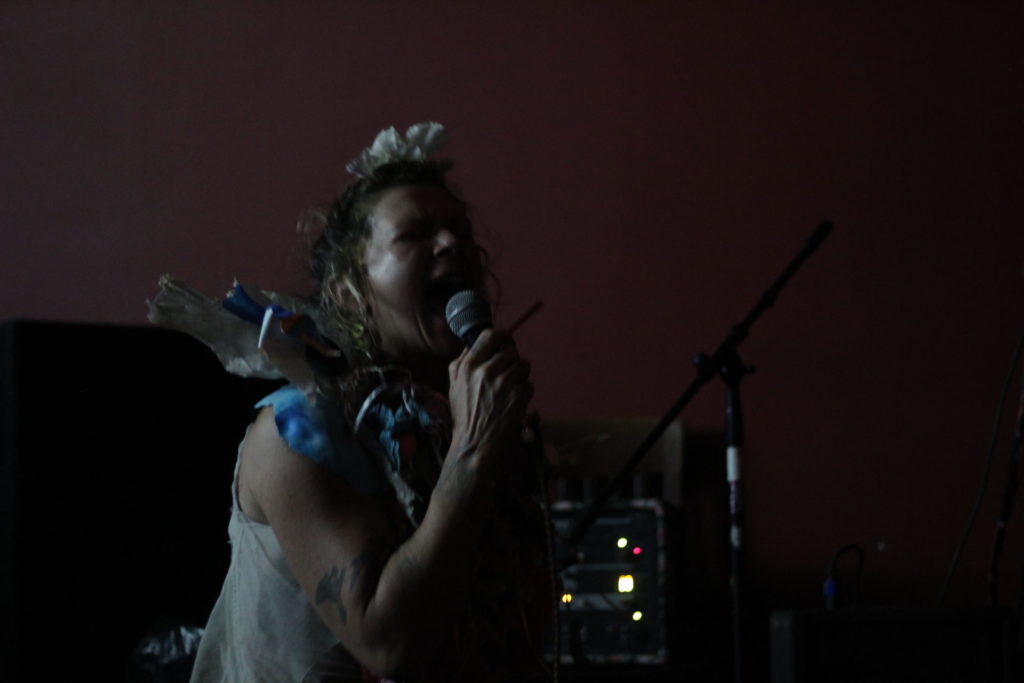 As the piece grew, it felt like the pain of the woods was being conjured and expressed through her body. The world we entered was haphazard, but it was still filled with life. The wolves howled at our feet and the hawks squawked overhead, filling the space with a reckoning and realization: we have to care for our planet because it is alive, just like us.

You can listen to LaLa Funstars discography here. 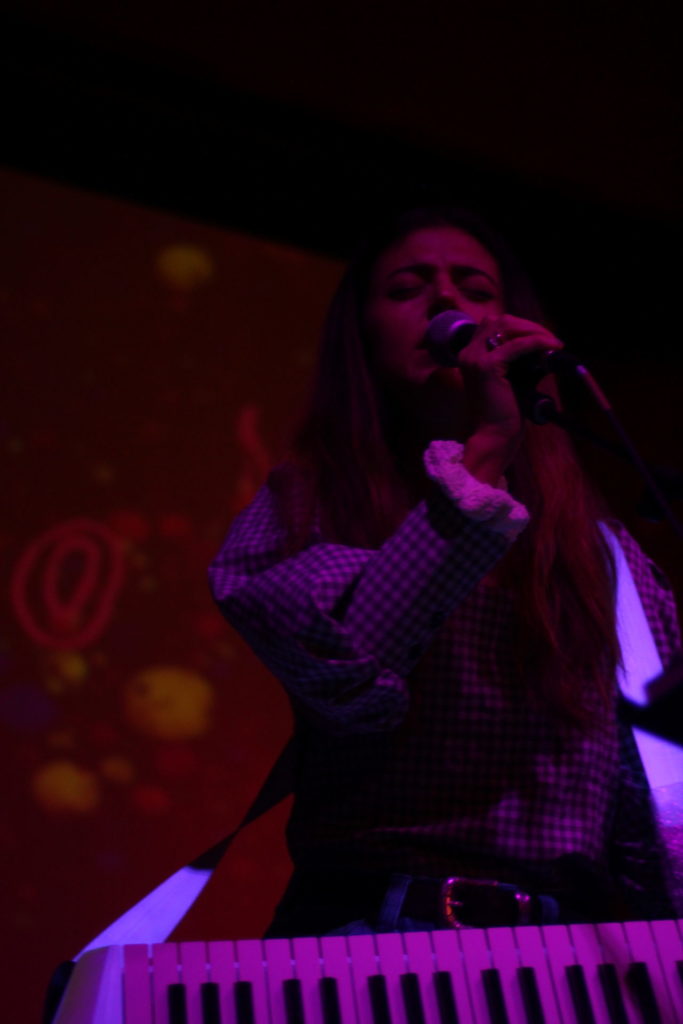 The projector screen changed from a woodland scene to the abstract paint brush strokes that melded into images of flowers. “mmeadows” was written across the screen in bubble letters.

Standing in front of it was the duo that came all the way from Brooklyn, Kristen Slipp and Cole Kamen-Green. Slipp slung a keytar over herself and while Kamen-Green grabbed his drumsticks and stepped in front of the drum pad. The projector washed both of them in various colors, painting their skin in meadows of pressed flowers. 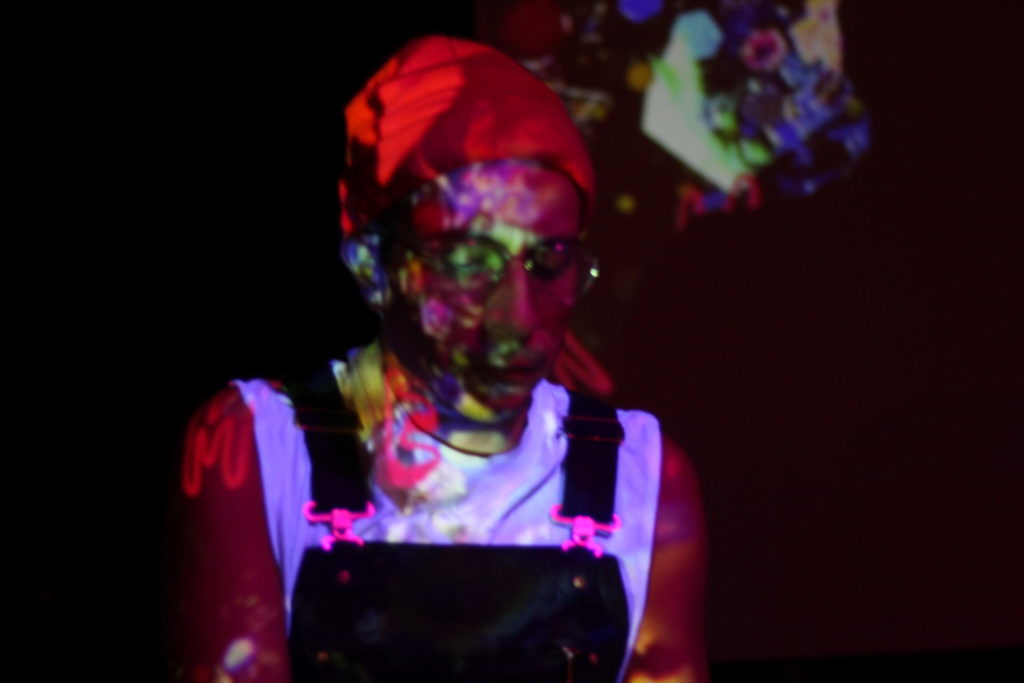 “I won’t let it phase me, that we two now are one thing,” Slipp sang on their song “Reflector”. Her vocals rang through through a delay effect, which sent reflections of her voice echoing around the room. When she pressed a note on her keytar, she triggered a vocal harmonizer. There was so much vocal layering, that I forgot that there were only two people on the stage. 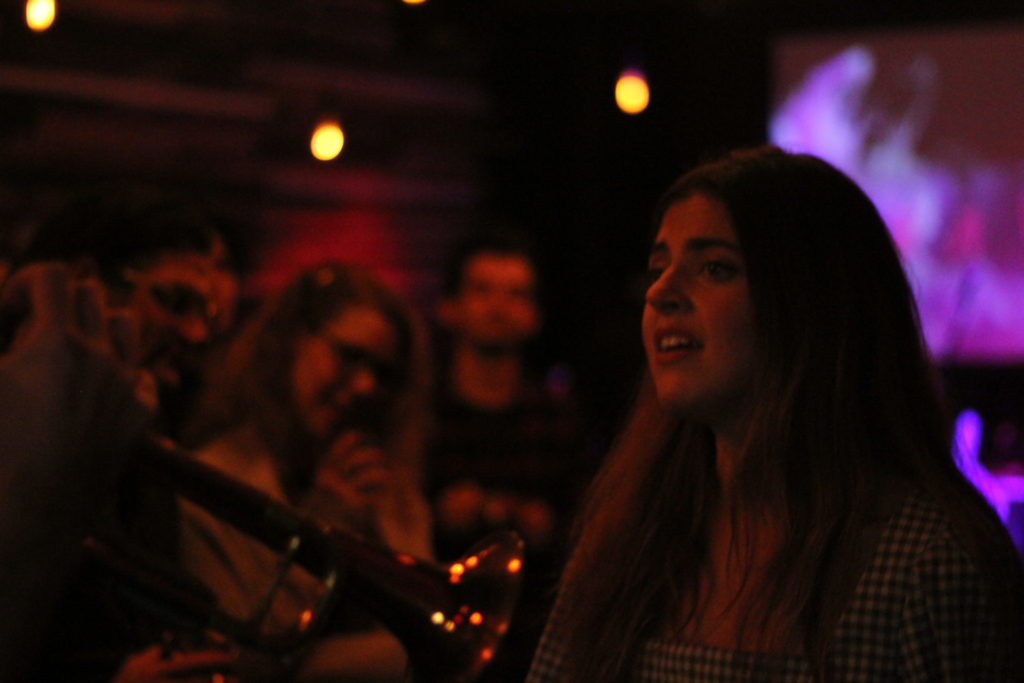 Although the majority of their set was electronic and synthesized, mmeadows unplugged for their closing song. Slipp brought a small-handheld keyboard and Kamen-Green brought his trumpet into the crowd for a cover of “Strong Enough” by Sheryl Crow. They sung without microphones and invited the crowd to sing along with them. Many did, harmonizing softly with the main melody. The intimate moment reminded everyone that magic of music is even sweeter when we are all making it together.

You can listen to mmeadows discography here.

Lights swayed gently inside of mirrored glass cases, unlit and waiting. The projector screen was rolled back up and replaced by a drum kit, vibraphone, keyboard, and three large square mirrors with lightbulbs inside of them. The three members of Square Peg Round Hole (Evan Chapman, Carlos Pacheco-Perez, Sean M. Gill) took the stage.

I wasn’t sure what to expect; I had listened to their music online, but I knew this live show was going to be different. The pedal thumped against the kick drum, triggering the lightbulb in front of it. They began “Gold Makes Blind”, off their just-released LP Branches, sending the lightbulbs ablaze. The lightbulbs were triggered to the beat of the drum kit, but also the vibraphone and keys. It seemed to be triggered by how much intensity was being put into each hit, lining perfectly with the beat.

In “How to Say Goodbye”, the melody began with the keyboards. It rose and fell, giving it both bounce and a sense of weight. It was the glue that held the composition together and acted as a blanket for the vibraphones that plinked against the steel beams in a much higher register. 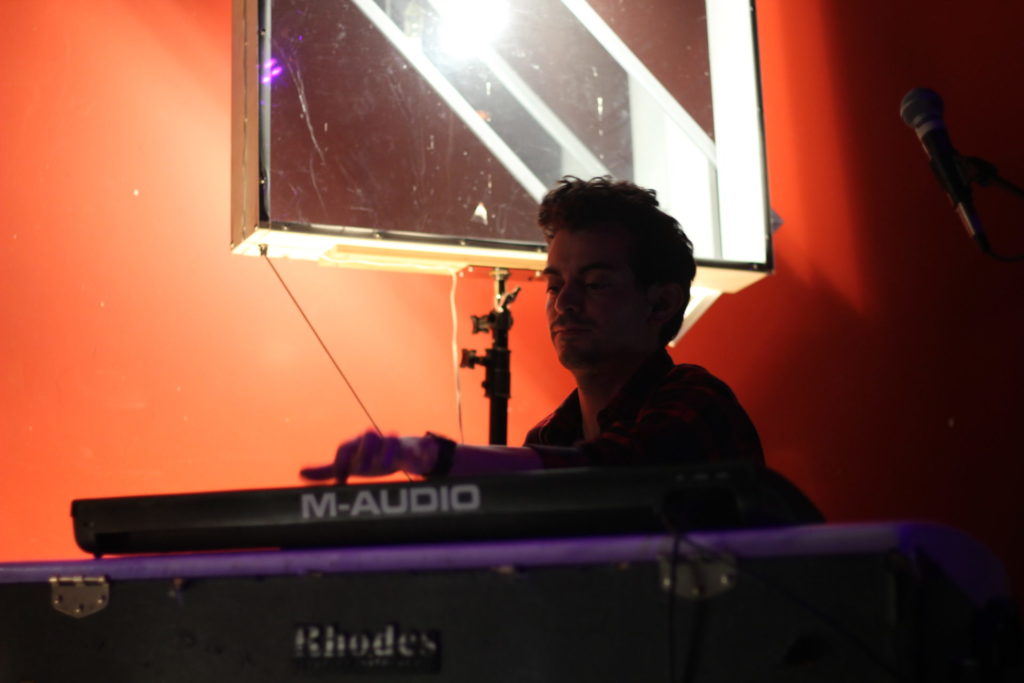 The vibraphone reminded me of wind chimes, skeleton keys, and springtime. The song bloomed like flowers stretching out and soaking in the sun’s new life-giving energy. The lightbulbs pulsed behind the band like a heart’s beating and came alive with each hit on the drums, vibraphone and keys. 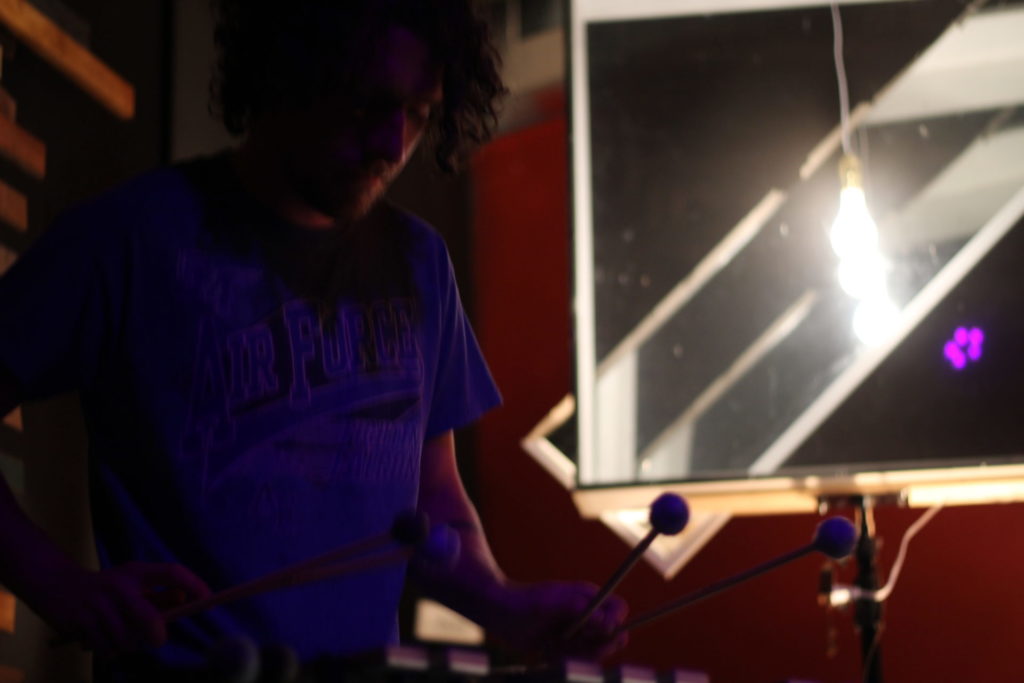 I was sitting on the carpeted floor and felt the booming beat reverberate through the floorboards, and then, through my body. My eyes closed. The lightbulbs swelled and became orange and red behind my eyelids, filling me with the warmth that music creates around us and inside of us. Something inside of me changed. As if the vibrations inside of me had been rewritten, reignited, and sparked with these new rhythms and melodies.

Instrumental music is more powerful than you think.

You can listen to their newest release Branches here.

All photos were taken by Ailís Clyne.

Kyra Skye can be reached at kyraskye19@gmail.com or via Twitter @skyewalker0